My mom was apparently willing to take a chance in order to travel. Growing up in Detroit, she chose to go to college (history major) in upstate NY, and when she returned she got her Masters in special education from the University of Michigan, with an emphasis on the elementary level. After teaching in Detroit, she applied to become a DoD teacher. In 1954, her first assignment was Camp McGill Dependent School in Japan. She had a first grade class, and by all accounts, loved what she was doing. She spoke about the kids in her class, and the class rabbits, Inky and Snowball. She played tourist with fellow teachers, evidenced by the large number of slides that she painstakingly labeled with where and who she was with (Thank You, Mom!). Of particular interest to me were the pictures of the children in school – they had a day called Kimono Day, and there are quite a few of girls (and the occasional boy) in traditional dress, and also the teachers. There is a picture of her in her kimono, and in her things, I found the kimono, which I have donated to AOSHS for their archives. [See more of Jean’s photos in our online collection.] 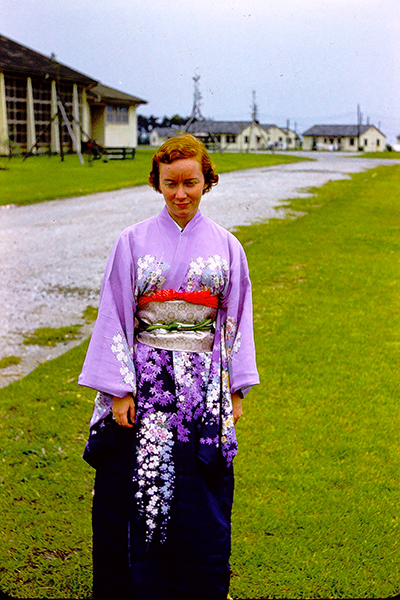 In approximately 1956, she moved on to Wheelus Air Base, Tripoli, Libya. While teaching there, she met a young Air Force pilot, who became her husband in 1957. I was born at Wheelus in December of 1958. Returning to the US in 1959, she continued her teaching career even while following my father around the country, to Iran for a tour, then back.  She retired in 1989 from Homebound teaching, but never stopped traveling. Egypt, Europe, Eastern Europe, Antarctica, Australia… she loved it. When I had the opportunity to travel with her, we went to France, Malta, South Africa. For many years, she went to Cambridge, England to take summer classes at the university. One of her goals in retirement was to read all the classics. She would sit down with Dickens, Austen, Bronte, Hardy – and a dictionary! A teacher in every sense of the word.

Something I thought remarkable, though, was that she kept in touch with at least 2 of the teachers she was with in Japan. Suzie and Dorothy. Every Christmas there would be a letter from each of them, and she would write them, up until the early 2000’s, when she mentioned to me that she hadn’t heard from one or the other. I don’t think she ever found out why she stopped hearing from them. She was a good correspondent, wrote copious letters and postcards from all her travels. I’m not sure who she got the travel bug from, but it was a constant in her life, and I have followed her lead.