The following is republished from Allison’s original post on Medium.

On Having Your Senior Year Turned Upside Down

The Class of 2020 is in a position that’s uniquely their own. But certain aspects of it have me reflecting on my own senior year… 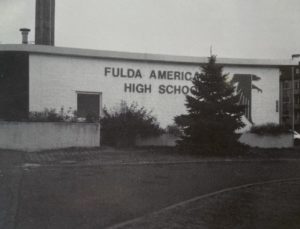 The Class of 2020 is about to finish their final year of high school under unprecedented circumstances. Long-held traditions and carefully laid plans have been waylaid. I have some idea how they feel. My senior year was pretty weird, too.

I went to school on a U.S. Army post in a small German town near the border between East and West Germany. The U.S. military’s Cold War-era mission there was to defend a mountain pass that was strategically important: the Fulda Gap. It was there that the Russians would most likely come through to the West in case of an invasion. (Spoiler alert: they didn’t! The border came down and the two countries became one again. Yay!)

I’d lived in Fulda and attended school on the Army post since 2nd grade, and I always assumed I’d have an ordinary senior year much like my brothers did years before me. But in 1993, the U.S. Government decided that with the Cold War over and Germany reunified, it was time to shut down some American installations in Europe — and Fulda’s fate was sealed.

My senior year was crazy from the start. It was a blur of goodbyes and tears and adjustments and uncertainty as soldiers were reassigned to posts all over the world and Army families shipped out by the dozens. Facilities on post, the American-esque resources we’d come to depend on, closed down one by one. The book store, the youth center, the library, the Shoppette, the Burger Bar, the movie theater, the gym and the PX all shut down well before we’d all cleared out. I don’t remember exactly, but I suspect the Class VI liquor and tobacco store was among the last places to close. The school remained active, even as the infrastructure around it faded away.

Fulda American High School was a small school anyway, with around 400 students in 7th-12th grades in a normal year. In ‘93-‘94, it dwindled to fewer than 60 students by year’s end. In fact, at some point the entire school boarded a double-decker tour bus and took a “field trip” to Munich for a couple of days. The whole school — teachers, too! — on a single bus, with seats to spare.

It was a stressful year. Many of our teachers didn’t learn where they’d be reassigned until the end of the school year, when they and their families — lots of whom had made Fulda and its connected communities their home for many years — were uprooted and placed in posts across the world. My dad, a high school music teacher, was lucky to be assigned to Hanau, not too far from. Fulda. My friend Maggie had been in Fulda since kindergarten and was just one year from graduation the year Fulda closed. She graduated the next year on a base in Japan. I lucked out.

It was a traumatic school year. There was a lot of grieving for our shattered expectations and the daily losses of friends and familiarity. Teachers and students would sometimes break down in tears in the middle of class — classes with no more than three or four remaining kids. Civilian kids (mostly teachers’ kids) like me were used to a handful of our Army brat friends rotating through every two or three years; this was orders-of-magnitude different. Every day we said goodbye to two or three or a dozen classmates.

The building had to be cleaned out, so it was emptied around us. Chairs, desks, books, band instruments and music stands were sent to other schools. The clocks on the walls came down and the big, blue metal letters on the front of the building were pulled down even as we attempted to cling to something resembling normal within the walls. 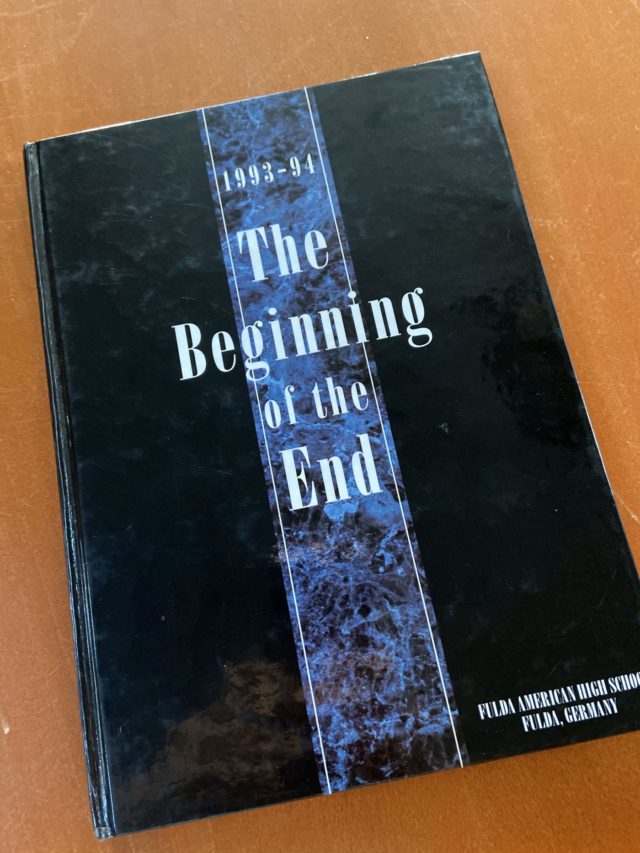 The yearbook was slim and had a lot of white space and repeating faces as we struggled to gather a variety of photos. Prom was held in December, while there were still just enough students to make it worth the effort. Our girls’ soccer team had nine players at its peak, and five towards the end. We forfeited so many games, borrowed players from other teams just to have a match…it was weird and embarrassing and silly and frustrating. There were only six kids left in band on the day we took the yearbook photo. Nothing was normal.

As kids do, we sought out the silver linings. We took advantage of the looser class structure to have more meaningful conversations with each other and our teachers. We may have gone on more than the usual number of pastry runs in our teachers’ cars during class. My best friend and I each had three lockers. Parking was abundant. We may have enjoyed a round of tequila shots from a teacher (on graduation evening, not before!). We sometimes had unofficial shorter school days. We may have gotten tattoos. We bonded over the shared experience. We recognized what we’d taken for granted.

The Army tried to keep families with seniors there until graduation, so I had a surprisingly large graduating class of 17. Graduation was held early because it was time for the Army to vacate. The ceremony was deeply melancholy and exhilarating all at once. Just like the whole year had been. 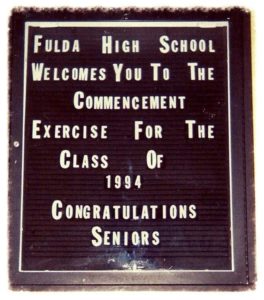 The post gates were locked the day after we walked across the stage in our school’s auditorium/gym/cafeteria to receive our diplomas. The keys were handed over to the Germans, and we were no longer allowed to go on post. There would be no going back to visit our hometown friends, our school, our teachers, our younger classmates who were a year or two from graduation. It was just…gone. My home, that school where my dad had a classroom — my home base — for 11 years, where I’d felt perfectly and excessively entitled since I was seven years old, was now locked away from me forever.

And I feel lucky. Because I lived through it, and because I still share a completely unique and indescribable experience with a small handful of others; because my senior year was nothing like I’d hoped or expected, but taught me more than an ordinary year ever could have. It was hard and painful and required a lot of patience and flexibility from everyone. And I sincerely wouldn’t trade it for anything.

So today, in the time of coronavirus and all the resulting cancellations and disappointments and grieving the loss of a normal life, I can’t help but see the parallels to my own senior year. My experience was not the same as what kids are going through now; I had the benefit of being able to prepare and reschedule and hug my friends and cry together. But I believe that the abrupt end of the school year is not the end of the class of 2020’s story.

Today’s students are faced with a senior year they’d neither hoped for nor expected. While my heart breaks for them and the loss of all they’d assumed it would be, I believe they’ll look back and see a truly memorable senior year that turns out to be even more special in surprising ways. The class of 2020 has been placed on a road less traveled — but that’s where all the best discoveries happen.