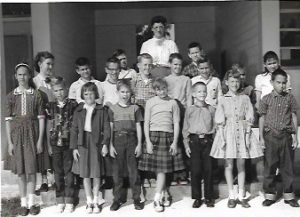 My family lived on Midway from Oct 1959 thru Dec 1961. I attended George Cannon School in 3rd, 4th, and 5th grades. My teachers were: 3rd grade Mrs. Childs, 4th grade Mrs. Sheets, 5th grade Mr. Bola. I will never forget my experiences on Midway and it still remains on my mind!

In 1960 the Island experienced a tidal wave generated from the huge earthquake in Chili. We got out of school early, the ‘wave’ hit the island around midnight. Big thing at school was marbles…huge marble games were played in the school yard with BIG stakes. Also, tether ball. School work was a lot harder than Stateside with an average of 3-4 hours of homework at night. There was no television, only radio. Teachers were either dependent women with teaching degrees (Mrs. Childs and Mrs. Sheets) or DOD teachers (Mr. Bola). The standards for teachers were high. Single teachers lived at the BOQ and had Officer’s club privileges. When I returned to the States in early 1962 in the middle of 5th grade to California, those kids were a year behind us in math and reading skills. Also, kids on Midway were in far better physical shape than stateside kids; you rarely saw a fat child. There were no cars; you either rode your ‘horse’, bicycle or walked. The school graduated its first high school class in 1959. There was no summer school, all the teachers left for the states at the end of the school year. The baby boom was in full swing and classes were full, around 30 students per school. Discipline was no problem; if a child got into any serious trouble, their Father wound up in front the base CO. I don’t remember any corporal punishments, although it was possible. School started at 8 am and secured at 4 pm I recall with an hour off for lunch; there was no cafeteria; you went home for lunch. In the summer there was swimming, little league baseball and scouts. The base ran movies during the week at 6 pm and 8 pm. In the summer there were daily matinees. The base theatre in summer was air conditioned to within an inch of your life; many of us wore jackets and sweaters! Sailors would make mascots out of us sometimes, and one of my favorite pass times was to ride the shuttle bus as it made a circuit of the island. The bus was generally driven by a young sailor, and they would tell you the story of their life. A big thing was to go down to the piers when ships came in and they would give you all the ice cream you could eat! When we left Midway in late Dec 1961, and returned to the states, I experienced severe culture shock. I was real hick compared to the kids in San Diego, although in better shape and more academically advanced. When I was a sophomore in high school in 1967, I ran across a girl who was in my 4th grade class; we really tripped down memory lane!