Just three months before I arrived in Okinawa, the American Occupation officially ended and the island government reverted to Japanese control. Instead of dollars, people used yen. Americans lived under Japanese law, signing rental contracts that conformed to Japanese custom and registering our cars paying the Japanese a tax and using Japanese license plates. We did, however, have special privileges under the new Status of Forces Agreement (SOFA) regarding importing of American products to the exchanges and commissaries, and nearly another 20 years would pass before the switch was made from driving on the right to the left side of the road in accord with mainland Japan.

When I reported to teach in 1972, Pacific Middle School was in the initial transition phase from a junior high to a middle school under the leadership of Principal Don Taylor and Vice-Principal Dorothy Weihe. Faculty members planned units of study together, combining, for example, history study with English composition and literature.

We teachers created lots of team activities promoting students to interact with each other as compared to the traditional individual study of junior high. Desks were constantly being rearranged to make discussion centers with a number of students talking together, a change from the traditional concept of straight rows and silence in the classroom which was difficult for some older colleagues to accept. Personally, I found it stimulating and liberating to watch students at work on a group project, being involved interacting and negotiating with each other.

The year was divided into modules giving students opportunity to experience a variety of subjects in the short term, a sampling of art, music, science, math, languages, history before they advanced to high school and year-long classes.

I particularly remember teaching the Scholastic sets of literature to my 7th and 8th graders. The books were boxed in cardboard simulated book shelves, all titles on the same theme, some in class sets of 25, some novels in sets of 8  to 12 for small group study, others, one each of numerous titles which allowed students to make personal reading selections. One of the favorites was The Man Who Rode the Thunder by Lt. Col. William H. Rankin about ejecting from his jet and falling toward earth for nearly an hour through a violent storm and surviving.  I can still see those small paperbacks first published in 1960. Currently out of print, copies sell from $150 to $300 on amazon, and a number of customer reviews say they read it when they were in middle school. A few were influenced by it to join the Marines. I wonder….were any my students at Pacific Middle?

While I taught at PMS, the faculty wrote narrative report cards. All the cards were located in the school office for teachers to work on during their planning periods. We didn’t assign grades or averages. I found it not only time-consuming, but challenging to come up with unique and meaningful comments for every student. Twenty-five years later, the computer programs we used in Europe offered us long lists of standard comments to select:  “works well with others, completes work on time, could do better, needs to study more, has missing assignments,” and so on.

The Pacific Middle campus contained rows of World War II quonset huts, all numbered as Temporary but sturdily built to withstand typhoon winds. Unlike the quonsets in Turkey, my previous assignment, these sat on concrete block walls several feet above ground level and most faced the east allowing cooling ocean breezes from across the street to blow through. Only the library and offices were air-conditioned.

The open doors did allow dogs and geckos access. And the individual classrooms, one per quonset, meant that on rainy days, students ran from building to building. I remember watching one boy extending his arms and hands to resemble a cobra facing off with a mongoose and zig-zagging them back and forth. “What are you doing?” I asked. He replied, “Dodging raindrops.”

The military had established a system of typhoon conditions to determine when to cancel classes or send children home. Conditions three and four meant a typhoon was forming in the nearby Pacific and families should stock up on food, water, and flashlight batteries.  Students were dismissed under Condition Two—typhoon expected to arrive within a few hours. Teachers were dismissed under Condition One, and only essential military personnel reported to work. The eye of the storm might bring a few hours calm, but most of the time, we were house-bound for three to four days.

Troublesome as typhoons might be, few buildings on Okinawa were destroyed. Clean-up involved removing tree branches and re-establishing electricity. The rains were welcomed because the island’s water supply depended on rainfall, and being one of the most densely populated places in the world meant water was at a premium. During several summers we endured water rationing, one day on, one day off, and most American homes had rain barrels on their rooftops.

In 1972, while taking a USO tour to Nagagusuku Castle, a Shuri ruin where Okinawans celebrated the Harvest Moon with picnics and dancing, I met the man I would marry. Two months later, when we decided to elope, I took a few days off from work in order to complete all the legal paperwork required by the US Navy, the American Consulate, and the Naha Prefecture. When I returned, I discovered that under the guidance of my substitute, my students had planned for a week of celebration parties, serving cake and ice cream, and presenting me with simple gifts and handmade cards with advice for a happy marriage, which has lasted, by the way, for 47 years.

I taught at Pacific Middle for three years before transferring to Kubasaki High. One of those years, the word was out that something big was going to happen on the last day of school when the buses brought students to pick up their report cards, then return home. Forewarned, we teachers arrived early and met each bus to check book bags as each person got off the bus. We collected dozens of eggs in cartoons and a few bottles of wine and beer.

The students were unnaturally quiet as they reported to homeroom for their reports. After waving good-by to the departing buses, we teachers  celebrated. We formed two rows across the parking lot, facing each other, and tossed eggs back and forth, increasing the distance separating us after each toss until all the eggs were broken. The last two to throw and catch an unbroken egg were the champions. We then gathered in the library to enjoy the drinks our students had provided.

Click any of the images below to see a larger version in a new browser tab (or window). 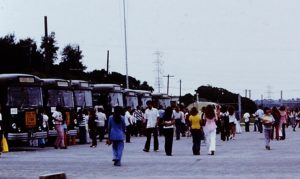