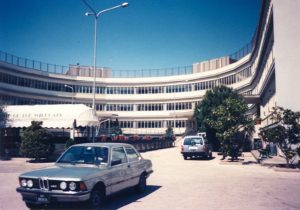 School year 1996-97 was the last spent in the three-story white horseshoe-shaped building located behind the Agnano Main Headquarters in Pozzuoli, Italy. The classrooms were large but dark, and when we opened windows hoping for a cooling breeze, we let in the smell of sulphur from the Solfatera volcano and Campi Flegrei.

The basement cafeteria was located within the center of the horseshoe, its roof extending high enough to allow windows and its surface flat enough for us to hold assemblies on top. At the close of the school day, the buses would ring around the cafeteria on a narrow driveway and students would exit the main building through four or five doorways.

That was the scene of a near-disaster early in the first quarter of the year. The dismissal bell had already rung and students were stopping at lockers, then milling about finding their buses when one of the drivers spotted black smoke billowing out the cafeteria windows. Trapped in the queue of buses, he began honking his horn. Shortly after, someone sounded the fire alarms. None of our orderly fire drill practices fit this situation, but somehow we teachers herded most of the students toward the football field so the buses could move away to admit the arriving fire trucks.

Some of the lucky students had retrieved their books, IDs, and house keys from their lockers and could take military buses to their homes or walk over to the Exchange or their fathers’ offices. But others had to wait an hour or more until the all-clear was given for them to go back inside the building.

The investigation of the fire determined that a group of four or five boys had skipped last period and were having a smoke together. When they thought someone had discovered them, they stuffed their cigarettes under some wrestling mats stored in a corner and ran. The boys were expelled and the US taxpayers footed the repair bill. It was an inauspicious beginning to a troubled year. Other expulsions resulted from DoDDS’s zero-tolerance policy toward weapons and at least once the military police were called in to remove an unruly student.

Conscientious students were troubled by the rudeness of some of their classmates. When the vice-principal remarked how rude some were to me, I pointed out that even his presence was not a deterrent.

DoDDS was implementing some new policies…at least in my experience…that year. With very little training on the Integrade program, teachers had to enter grades on the computer. I kept my own hard-copy gradebook after several lost all their records and didn’t know how to retrieve them. That year was also my first experience with Block Scheduling and required continual adjustments to tried and proven lesson plans.

Life on the economy held its own difficulties. That winter it rained for many weeks, flooding even the major highways and washing out some alternate roads we Americans found to reach our homes. Snowfall was even reported on Mt. Vesuvius.

Property theft was rampant. The school itself was encircled by a high wire fence, and entrance was through a gate kept locked even during daytime hours. The computer classrooms were located on the third floor and locked behind gates on the stairways at night. But the building was open evenings for University of Maryland classes as well as cleaning, and components of computers in regular classrooms frequently disappeared before morning.

The elementary school out in Pinetamare had similar problems. Despite its stone wall, there was no guard on the gate early in the year. One teacher parked inside the wall and entered the building to invite her colleagues to come see her new car. But when they came outside, the car was already gone. In that same neighborhood, my Italian neighbor’s Mercedes was stolen while he made a quick run inside his house to change clothes.

My husband and I thought our home was safe because he was retired military and stayed home while I was at work. But one stormy morning, he heard a car engine running while someone was prying open the metal shutters covering the front windows. The thief was frightened off when he discovered the house was occupied, jumped out the window and over the fence onto the roof of the getaway car.

Fortunately, there were some pleasant cultural experiences. After our break-in, we purchased a beautiful German Shepherd dog. The kennel owner persuaded us to enter her in the Napoli International Exposition and she won first in her puppy class. We were never bothered again by burglars.

Our villa across from the beach was spacious and beautiful and provided some brilliant sunset views. Our Italian neighbors were friendly, watching our dog when we travelled. They invited us to a Christmas dinner Italian style which lasted four hours, and I reciprocated with an American steak dinner which they loved, lingering afterwards to sing Neapolitan songs around the piano. One Saturday, they drove us sight-seeing down the coast to Amalfi.

For Thanksgiving weekend, the Roman Catholic chaplain invited us Protestants to join his congregation in Assisi for dinner. He reserved an entire hotel and their cooking staff to prepare turkeys for some thirty or forty of us while we brought potluck vegetables and desserts. Before the dinner, a Franciscan monk from Ohio gave us a guided tour of the Basilica.

That spring, I took one of my two any-purpose leave days to attend the Good Friday religious parade on Procida Island. Men and boys in religious robes and capes carried elaborate floats depicting scenes of Jesus’s Passion, some artistically laden with fruits, fishes, and loaves of bread to represent the Last Supper.

I don’t recall many school activities, for the American community was scattered throughout the suburbs. But the students did celebrate Spirit Week instead of Homecoming with decorated hallways and lockers, a bonfire burning effigies depicting the opposition football team, and separate dances for junior high and high school students. In the spring, classes were dismissed for an all-school Field Day at Camp Carney Recreational Center inside an extinct volcano crater.

As the year drew to a close, each teacher was tasked with packing up the texts and materials he or she used so they could be moved to the new building under construction at Gricignano near Caserta. This was an entire new support facility for Naples with new housing and with the exchange and commissary moved from Agnano as well.

Since most of us teachers lived north of Naples, the move would eliminate the heavy city traffic commute along the Tangentiale or “Tange” as we called it, and we could still remain in our homes. But we would no longer be traveling along the historic Roman route past ancient ruins, nor would we be able to watch the sunrise over Mt. Vesuvius on clear mornings. I guess nothing is ever perfect.