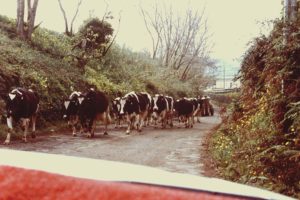 Prior to 1992, the pleasure of an assignment to the Azores was a well-kept secret:   slow-paced, pastoral life-style with old-world European cultural charm, Portuguese architecture fronted by decorative sidewalks, friendly locals, small classes, yet with frequent space-available flights through Lajes AFB to the US or Europe. Teachers sent there chose to stay, some even buying homes on the island.

All that changed in 1992 when the Portuguese government decided to enforce a little-known policy of limiting stays by foreign nationals to three years. The result for DoDDS meant a nearly-complete turnover in teaching staff. I was one of the lucky ones,  a CONUS re-hire after a 15-year hiatus spent teaching in the US public schools of Washington, Kansas, and California. And I must acknowledge that the new staff benefitted by wonderful packets detailing classes taught, activities established, as well as lists of favorite restaurants and local events from those who departed.

I did notice, however, a number of changes from the DoDDS experiences I had between 1969 and 1977. For one thing, the staff was grayer. In 1969, many of us new teachers were fresh out of college with only two years’ experience. We were single women being welcomed at many bases by young single officers fulfilling their draft duty during the Vietnam War era. There were lots of marriages in those years, and as the women left to follow their men, lots of openings were available for those wanting to transfer. Those of us eager to travel seized the opportunity to see much of the world at government expense.

By 1992, the husbands we had found were now retired from the military and we wives were the DoDDS overseas sponsors. The Department of Defense was also moving into a draw-down era, closing bases and returning families to the States. Reduction-in-Forces (RIF) included teachers, by attrition if possible, but if your position was cut and you refused the transfer offer —usually to less-desirable locations—your only choice was to resign. Consequently, most couples were “hunkering down” in place waiting until retirement. The opportunities to transfer were dwindling.

The high school and elementary school buildings at Lajes were linked by a covered passageway, but each had its own principal and staff. My student load never exceeded 45, although I had five preps:  English 9 and 10, French 1, 2, and 4, pretty much an ideal assignment. In looking back, I realize modern technology had yet to reach the Azores. Civilian telephone service relied on operators sitting at a switchboard, and we had to make appointments to place long distance calls to the States. I used my own personal computer as a word processor, but Internet connections and email obviously were not available in 1992. We relied on British television for the latest news and Armed Forces Network (AFN) for delayed transmission of American television programming.

The school year was notable, however, for the three different teaching practices that we attempted simultaneously.

First, we adopted a rotating schedule based on the theory that better learning was achieved in morning, rather than afternoon classes. Seven schedules were established, each beginning with the successive class period. A few adjustments had to be made to facilitate sharing the lunchroom with the elementary classes. I think most of us teachers found that classes did indeed perform better in the morning, but it required everyone carrying a card with all the schedules and a daily announcement that “We are on Day One, or Two, or Three,” each morning. Whether the benefit outweighed the confusion is debatable, in my opinion.

The second practice we tried was titled “Success Endeavor,” based on the theory that students not only have various learning styles which should be accommodated, but they will succeed if given various and numerous opportunities to do so. In practice, teachers were to re-teach a lesson using  different approaches and re-test in different ways until all the students passed.

It seemed very utopian to me.

My better students admitted that they really didn’t apply themselves during the first lesson, hoping that later lessons and tests would be easier. I observed as a teacher that the pace of learning slowed and less learning was accomplished, particularly in classes which functioned at the knowledge level of Bloom’s Taxonomy. For instance, in language classes, a student needs to learn his numbers before he can advance to telling time. If a student postponed learning those numbers knowing he could re-test multiple times, he might eventually earn an “A” but he would know less information in the long run.

In my opinion, the most useful and successful practice we implemented in 1992-93 was Joan Gibbons’s Writing Assessment program, based on the Bay Area Project in California. Joan built the program DoDDS-wide, beginning with weeklong training sessions for select teachers who were then expected to return to their schools and teach the plan to the rest of the faculty.

Another English teacher and I traveled twice to Livorno, Italy, meeting with teachers from throughout the Mediterranean and European District. We learned and practiced doing four modes of discourse:

Fundamental to all the modes was using the concept of “Show; don’t Tell.”

Not only did my own writing improve, but my students loved and thrived on the approach. By the end of the school year, each sophomore chose his or her best work to compile an anthology for themselves and for the Lajes Base Commander, Brigadier General Thomas Pilsch, who was duly impressed with their success.

The writing assessment continued annually for about a decade, testing grades five, eight, and ten. In the summer of 1996, I joined 50 other DoDDS teachers in Alexandria, Virginia to evaluate some 19,000 essays and the DoDDS results were acclaimed nationally. Such a pity that program was eventually discontinued.

Briefly, in closing, let me mention some of the many unique cultural experiences Lajes offered American teachers, one of the main reasons some of us worked for DoDDS. A number of us faculty members attended a grape harvest festival beginning with the stomping of the grapes, a picnic under the grape arbors, and a folk dancing performance. We attended an arena Portuguese bullfight in which the bull is allowed to live. Religious celebrations included a candlelight procession, the participants singing as they climbed the hill past my home to honor “Our Lady of Fatima” and a Pentecost Sunday with parades and the distribution of fresh-baked loaves of bread from the colorful “Spirit Houses” adjacent to each Roman Catholic Church.

No remembrance of Lajes and the Azores is complete without mention of the cows and donkeys.  Black and white dairy cattle were herded down roadways between small, square pastures surrounded by rock fences. Farmers hauled the milk to market in galvanized tin cans strapped to the backs of donkeys while riding themselves in a unique wooden side-saddle. Those same donkeys at other times  are allowed to roam the neighborhoods at will, startling Americans leaving home for work in the early mornings. And there were the days we watched farmers walking their fields on the slopes of the volcanoes, broadcasting the seed by hand.

My year teaching at Lajes remains one of my favorite DoDDS  assignments.