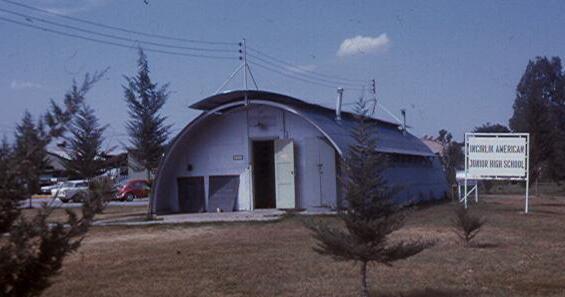 When I arrived at Inçirlik AFB in 1971, the elementary students met in a regular school building, but the junior high, which consisted of grade 7-8-9, met in about a dozen quonset huts on the periphery of a large grassy field, while grades 10-11-12 students boarded at Karamursal near Istanbul, returning to their parents at holidays.

Those quonsets were primitive compared to DoDDS school quonsets elsewhere, such as Pacific Middle in Okinawa. The curvature of the building began at ground level, so we lost considerable stand-up space around the outer walls. Many of the floor tiles were cracked so I pulled grass from time to time and I would hear the scurry of mice when I opened the door in the morning.  The quonsets were heated with coal oil furnaces which we teachers lit on chilly days, igniting a wad of paper jabbed onto a wire coat hanger with a match, then inserting it into the furnace.

There were no bells, so all teachers were supposed to synchronize watches with the office clock each morning when we signed in. That could have worked, if only people had resisted the temptation to dismiss an unruly class early. Let one group of students loose outside their building, and teachers around the campus had difficulty finishing any lesson underway.

I recall very few disciplinary problems that year. Fathers had discovered an effective method of punishment for poor grades or misbehavior. During the early 1970’s, the Beatles had popularized longer hairstyles for civilian men and boys. Nevertheless, the military still required short cuts around the ears and neckline, and for the most part, DoDDS schools maintained a dress code that conformed to military standards forbidding the wearing of hats inside buildings. I recall the first time an eighth grade boy begged me to let him wear his knit cap during class because his father had given him a military haircut for having poor grades. Well, I had to uphold the school dress code, of course. It didn’t take long for the boys to make behavior choices to avoid their dads’ punishment.

Inçirlik in southeastern Turkey was isolated not only geographically from large cities, but the Americans were isolated culturally, religiously, and linguistically from the surrounding Turkish communities. This resulted in close bonding within the base itself.

Parent sponsors welcomed incoming teachers to stay with them until the teachers, who were required to live in Adana, could find an apartment. Many continued to socialize throughout the year but few of us developed relationships with the Turkish population.

In our search for a place to live, the Housing Office ran bus tours with realtors as guides to view available apartments. At the end of the day, we indicated our choices and were helped to negotiate a contract. When our household goods were delivered, we were instructed to make an inventory, or beyaname, of everything we owned. No furniture or appliances could be sold to Turkish buyers, so even if it broke or quit working, we had to keep it until we PCS’d out of the country, for our exit beyaname had to match our entry one.

I chose a new apartment on the fourth floor of a building near the soccer stadium. There was no elevator and often no hot water. To this day, I remember the phrase “Yok sijak su,” but the building manager always shrugged his shoulders implying “what can I do about it?”

The base chaplains organized dozens of bus outings to Goreme, Cappadocia, Castle by the Sea and its beach, Ephesus, the Roman ruins at Anavarsas, and Crusader castle ruins. On lengthy holidays, many of us traveled to Egypt, Israel, Lebanon, Greece, or Cyprus. Space available travel was possible to Ethiopia, but planes had to leave at strange hours so they could arrive in Addis Ababa during daylight for there were no runway lights. Air Force pilots flew often to Iran, still ruled by the Shah, and were willing to bring back rock lamps, globes made of multi-colored broken glass. They would also bring back Greek flokati rugs as long as they landed at military airports and didn’t have to register them on beyanames. Women never went into Adana unaccompanied because men would follow us muttering under their breath, but we managed to shop for carpets, handmade, solid wood furniture with marble inlay, and antique copper or brass items with guys from the base along as chaperones.

My year in Turkey remains as one of my most memorable with DoDDS. I think some of us felt a lot of anxiety in that culture. We were given many warnings:  smuggling or selling American goods to Turks could result in prison as could drug use; travelers had been accosted in the countryside when they had auto accidents and threatened with violence, some children would throw rocks at us when we took photos, a mob of school boys followed me and a friend as we explored a castle ruin, then beat on my car and broke off my rearview mirror when we didn’t give them a tip.

Still, I’m glad I had the experience for it has given me a deeper understanding of current political events in the Middle East.