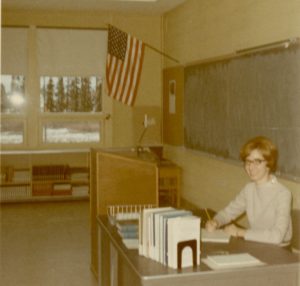 In an “ice-olated” location like the Strategic Air Command (SAC) base at Goose Bay, Labrador, the arrival of a planeload of new teachers was a Big Occasion. The airport lobby was packed with parents, children, and a few single Air Force officers looking over the mostly single women hired by DoDDS. Our appointed sponsors waved signs with our names and greetings of welcome.

By evening, we were unpacking in the single rooms assigned to us in two long green barracks and getting acquainted like the college freshmen we had once  been. The Officers’ Club where we would take most of our meals was a short walk across the street. But we rode buses to and from the high school, even before the snow began to fall—180 inches worth that winter.

For many of us, this was our first DoDDS assignment, and the disappointment of not being in a really foreign country was balanced by the 20% pay differential we earned. Some of us purchased vintage used cars, called “goose-mobiles”— hand-me-downs from past residents. The age didn’t matter because less than  50 miles of roadway connected the base with the only two villages in the area, Happy Valley and Northwest River. More important to convenient transportation was connecting the engine block heater to the electrical “hitching posts” outside each building.

The high school classes, grades nine to twelve, met in a modern pleasant building in the housing area, and the curriculum was so similar to what I had experienced in the States that very little stands out in memory as unusual. The yearbook contains photos of clubs such as Chess, Glee, Band, Future Teachers of America, Home Economics, and Math. The STUCO was active and several students were initiated into the National Honor Society. Girls joined pep club and cheerleading while boys played basketball and volleyball. There was no football team, probably because of the winter weather. Students interested in acting could join The Goose Little Theater which produced “The Crucible” or go out for the senior play which that year performed “Life With Father.” Boys in 1969 still wore their hair cut above their ears and girls wore skirts above their knees.

Seniors chose as their motto the saying, “A journey of a thousand miles begins with one step” and their class song was “A Time for Us,” the theme song of Zeffirelli’s 1968 movie Romeo and Juliet.

Two innovative practices were introduced. Sophomores could enroll in a Humanities course which met during a 2-hour block team taught by three teachers while Freshmen had a modular schedule with class length varying from 30 minutes to 80 minutes, changing daily.

I taught first and second year French and ninth grade English that year. In particular, I remember that as one nervous boy gave a speech, his friends began quietly counting, “one, two, three….” When he finished, a buddy shouted out, “Do you know how many times you said ‘you know’?”

The whole community participated in Fire Prevention Week, crowning a Princess who rode atop a decorated float in a parade, and high school students were given the opportunity to put out fires in a parking lot using an extinguisher

Because of its location so far north in Canada, during much of the winter we left for school and came home again in the dark. To keep pipes from freezing, even the toilets in restrooms flushed hot water.  Popular outdoor activities included ice fishing on the bay and riding snowmobiles, called “skidoos” through the woods.

Three of us teachers enrolled in flying lessons and earned Canadian licenses. We made our solo cross-country flights to a construction site for a hydroelectric plant at Churchill Falls, and afterwards, the Flying Club president arranged for us to go up in T-33 jets over the base. Word spread quickly one day when one of the earliest 747 Lufthansa jets made an emergency landing. The entire community, Royal Air Force (RAF), USAF, and civilians were invited to look around its interior including the cockpit.

The only way in or out of the area in winter was to fly. By May, the most popular song on local radio stations was Ann Murray’s “Snowbird” with listeners joining in, singing the line “take the snow back with you where you came from on that day.” Canadians located in distant villages up the coast sent personal messages by radio. At the Goose, we did have good telephone service, but mail delivery was at times hampered by poor flying weather.

The few travel opportunities during holidays included flights to Labrador City, Quebec City, Montreal, St. John’s, Newfoundland, or going home to the States. Neither were there many souvenirs available for shopping. Some of us purchased wool blankets from the Hudson Bay store and took them to Eskimo seamstresses in Happy Valley to make into coats and parkas beautifully embroidered with designs and trimmed with seal fur. As the ice on the bay broke up in spring, Eskimos and Canadians started bringing the soapstone seals and walrus figures they had sculpted over the winter as well as jewelry made with the iridescent blue and green Labradorite stones.

Because our location was labelled by DoDDS as “extreme hardship,” we received extra points toward transfers, and most of us left in June. But over my career in DoDDS, the majority of friendships which endured have been those I made in Goose Bay.