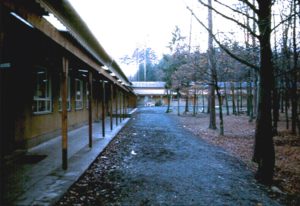 When I arrived for the first time in Europe, vaguely retaining some high school German, I felt much relief to be passed along to my destination by veteran DoDDS teachers through their amazing relay system. A fellow teacher met my plane at Rhein-Main AFB and registered me at the military lodge. The next morning, another teacher delivered me to the Frankfurt Main Train Station with instructions to get off the train when it stopped at noon, for that would be Nürnberg. Someone from the Nürnberg faculty settled me, jet-lagged, into the American Hotel across the street for the weekend, and on the following Monday, he sent me by train on the last leg of the trip to Ansbach.

My first impression of the Ansbach Junior High was that it looked like a Girl Scout cabin in the woods. “L-shaped,” all the rooms opened to an outside covered walkway while the library and principal’s office was in the corner. We were a small faculty—I can only recall five or six of us—because we only taught grades 7-9, each our own department head.

The military presence in Ansbach was Army, situated in three Kasernes or camps. The school, military offices, and chapel were in Barton Barracks, the elementary school, housing, Officers’ Quarters and Club in Bleidorne Kaserne, and the commissary and exchange in Hindenberg Kaserne across town. A helicopter squadron occupied Katterbach, where years later a new school was built.

I recall little about the curriculum or educational methods that differed from what I had experienced in Goose Bay the previous year or in stateside schools. As the only English teacher, I taught grammar, writing, and literature, with the help of a reading specialist for many of the students. The one incident that stands out was a parent’s objection to my assigning Steinbeck’s Travels with Charley. She had found the only place in the book where Steinbeck quoted a folk ditty popular with California miners that contained the word “bitch.”

As most faculty do, we talked about our students at lunchtime. One girl’s disruptive behavior was a frequent topic, but I didn’t know her and finally said so.  A few minutes after classes resumed, there was a knock at my door. A girl standing there handed me a note and said her teacher had asked her to wait for my reply.  Opening the note, I read “This is the girl we were talking about.”

I suppose there were sports and music, but I don’t believe any yearbook was produced. For the first time in my experience, students were dismissed to march in an Earth Day parade, carrying posters they had made.

Student dress codes were common in those days, but I don’t recall many issues with conformance. I lived by my own teachers’ code from college days; as a woman I always wore dresses or skirts, and in that era, the length was above the knees, which at times was not warm enough for German winters. Since DoDDS had never mentioned teacher dress, I decided they weren’t going to, so on the last day of school, I taught wearing a fashionable three-piece pants suit. It was never an issue again.

For the first semester, I lived in one room and shared a bath with an elementary school teacher in the Officers’ BOQ. Without cooking facilities, I took all my meals at the O-Club next door. Someone finally let slip the news that we teachers qualified for larger quarters, and since Ansbach didn’t have any, we could apply for a non-availability housing allowance and rent someplace on the economy. After Christmas break, the school nurse and I moved into a small furnished apartment above a gästhaus in the nearby village of Geisengrund. Each morning and evening, the landlord delivered a can of heating oil for us. His wife was a great baker and often brought us cookies or rolls, and even taught us to make apple strudel.

As the years went by and I spent hours grading papers in evenings and weekends, I often reflected “how did we teachers find so much time to travel back then?” German trains were efficient, fast, cheap, and a lot of fun. Before school even started that fall, I had traveled to Denmark, Salzburg, Vienna,  Berchtesgaden, and had cruised down the Rhine from Mainz to Koblenz. Most of us kept cosmetic bags packed, ready to leave at the first suggestion.

Rothenburg ob der Tauber was only about 20 miles from Ansbach and became a favorite shopping and dining spot. I attended the performance of the Shepherd’s Dance there that fall. Friends and I camped at Oktoberfest. After I bought a new Volkswagen, we spent a winter’s day at Neuschwanstein in new fallen snow and drove to various other castles, and one day in Lent, I attended a Fasching parade in Rottenburg which featured antique, hand-carved wooden masks.

During Thanksgiving break, we flew to Berlin, crossed into the East via Checkpoint Charlie, visited museums, attended an operetta, and danced at a nightclub which seated customers in booths connected with each other by pneumatic tubes so people at one table could send messages to people at another.  Friends and I drove to Rome for Christmas and to Amsterdam and Paris for Easter break.

Germany was rated by DoDDS as a “Desirable” assignment, and normally teachers were expected to stay at least two years. But I was in a hurry to see the world, so I volunteered to transfer to a Less Desirable location and was given a position in Adana, Turkey. Many years would pass before I returned to Germany, my favorite country outside my beloved United States.