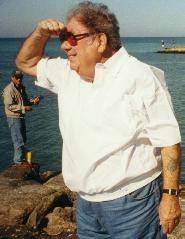 William P. “Bill” Lutz was born and raised in New Jersey. Bill took an early interest in culinary pursuits due to the occupation and influence of his mother. In December 1941, immediately after the attack on Pearl Harbor, he enlisted in the U.S. Marine Corps and spent the duration of the war in the South Pacific. Most notable during this tenure was his participation in the entire six-month battle for Guadalcanal and the Solomon Islands.

Following World War II, Bill returned to New Jersey and attended Seton Hall University where he earned his BA and, subsequently, an MA in the field of elementary education and administration. After a period of teaching in New Jersey he applied to the overseas program and was assigned to France. Bill taught and enjoyed life in Paris and Poitier where he was assigned as Teacher/Principal at the latter. Administrative assignments followed with principalships at Garmisch, Wurzburg and Heidelberg (Patrick Henry Elementary) in Germany. Bill entered the University of Southern California doctoral program and earned his Ed.D. in 1972. He was then transferred to Incirlik Air Base, Adana, Turkey as the K-12 principal.

In 1974, Bill was reassigned to Torrejon Air Base, Madrid, Spain, as the elementary principal. Subsequently, he was selected to serve as the Administrative Officer for the DoDDS-Mediterranean Region. During his tenure in that position Bill also served as the District Superintendent for Spain-Portugal-Azores. Bill retired to Englewood, Florida in 1986 where he devoted his remaining time exclusively to his wife, Traute, to his many friends and to his two other passions, gardening and cooking.

Bill is fondly remembered and cherished for his kindness and compassion at all times, as well as for his fairness and professionalism as an administrator/educator.