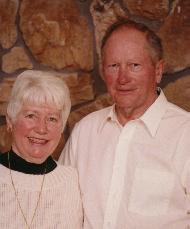 In August 1958, Warren, Joann, Cami(7) and Kenny(6) arrived in Kaiserslautern, Germany. There I taught fifth grade under Jane Ritter. Two years later, I tranferred to the junior high as a teacher/counselor with Pat Patterson. Walt Ingram was the superintendent. In 1961, we moved to Stuttgart, where I was a counselor at Boeblingen with Delia Alpert. Joanne worked as a secretary at Ludwigsburg High School for Paul Spurlock. Frank DeMartine served as superintendent.

During the summer of 1964, I was assigned to Munich’s Alabama Caserne as a counselor with Jerry McDougall. After ten days in Munich, I was offered the teacher/principalship in Oberammergau. After a 30 second talk with Joann, I took the job! It soon became a full time principalship when Murnau, a three teacher school, was added. Those were four wonderful years.

Next came a call from Hank Henry saying I should apply for his job as Curriculum Branch Chief in Distict VI and VIII with Hal Evans in Wiesbaden. I got the job with its 69 schools in Northern and Western Europe. After the first year, I was assigned as a temporary principal of Giessen Elementary/Junior High School when Sanford Bale chose not to return to Germany. Joanne worked for Robin Gartner at Vandenberg Elementary. Cami graduated from Wiesbaden HS that same year.

Eventually, I was given the permanent principalship of the Giessen school and Herman Search became my boss. That was the last school job for Joann as nepotism became a new word in our vocabulary. Ken graduated from Frankfurt HS during our years in Giessen.

In 1972, Hal Evan called to offer me the job as assistant superintendent of the Mediterranean District Central in Naples, Italy. Joanne and I really enjoyed our stay in Naples. The chaotic conditions did not affect us much as our children had grown and were both in the U.S. After one short year in Naples, Dr. Mason dropped in to offer the principalship of Mannheim HS, Germany.

Eleven years later, Jerry Bloom called offering the superintendent’s position for Spain and Portugal. We had grown to love Mannheim, but decided to accept the challenge. Two years later, Bob Manring asked me to trade Spain and Portugal for Italy. Gladly!! Those last years in Italy capped off a wonderful career with DoDDS. I enjoyed nearly every day of my 31+ years. There is no question in my mind that I worked for a superior school system. I still miss it.

Now Joann and I are ensconced in Port Orchard, WA where we enjoy life to the fullest. We both give back to our community with volunteer efforts. I am about to go for my third term as a city councilman come November 2001.

The photo included was taken for our 50th wedding anniversary.