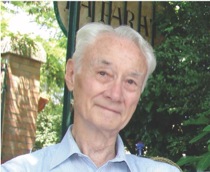 Thomas Townsend Drysdale, Jr., died on February 28, 2013 in Goodyear, AZ, after a brief illness. Tom was born on May 4, 1921 in Alamosa, CO, to Oneta Moore Kirkpatrick and Thomas Townsend Drysdale, Sr. He spent his early years in CO. He attended Compton Junior College, CA, where he met his future wife, Norma Fay Hall. At Compton he was the basketball high scorer in the state of California for that year. He also played clarinet and received both state and national champion status on the instrument. He played for a time with the Long Beach Symphony.

He enlisted in the U.S. Army Air Corps in 1941 and served in WWII as a B-24 pilot in the Eighth Air Force, 44th Bomb Group, and flew missions over Sicily, Naples, Normandy and Germany. On his last mission, his plane was badly damaged. Upon the return over the channel to England, all the crew bailed out but Tom and the co-pilot, who were badly injured in the crash landing. He won the Distinguished Flying Cross and European-African-Middle Eastern Service Medal.

He received a B. A. from Whittier College, in Whittier, CA, in 1952. He taught in the Whittier elementary school system from 1952 – 1956. He served as a principal and superintendent in the Department of Defense Dependent School System in England, Germany and Hawaii from 1956-1981. After WWII he served thirty years in the U. S. Air Force Reserves, attaining the rank of Lt. Colonel. He received a Ph.D. in comparative education from Georgetown University in Washington, D. C. in 1973. He was an adjunct professor of education at Northern Arizona University from 1984 – 1994.

A resident of Goodyear for 18 years, he leaves his beloved wife of 70 years, Norma Fay Hall.