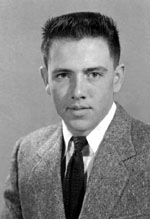 Thomas E. Lewis was born on March 16, 1940 in the Panama Canal Zone. Tom would have graduated with the Nouasseur Class of ’58.

Photos of Judith Ann Chapman and James E. Snyder, the other two students killed in this accident, may be seen by returning to the alpha roster and highlighting their names.