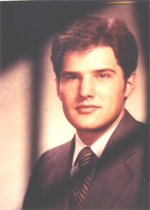 Ted Block was born in the Valley Forge Army Hospital, Phoenixville, Pennsylvania. He attended the SHAPE American High School, graduating in 1973 as valedictorian. He had been the editor of the yearbook, La Lion. From there he went to Harvard College, graduating in 1977 when he was commissioned in the US Army – Infantry. His assignments included Fort Benning, Georgia, Germany (3rd Armored Division), Fort Bragg, North Carolina (including American Embassy, Somalia), Fort Leavenworth, Kansas and Fort Hamilton, New York. Ted married Pamela Davis of Wilmington, Delaware in 1984. He was medically retired in 1987 from complications associated with Multiple Sclerosis. He attended the George Washington University Graduate School. Ted passed away May 14, 1997 and was interred with military honors in Arlington National Cemetary.

You may read the biographies of his siblings, who are included on the Block family paver, by returning to the alpha roster and highlighting each name: Gregory Block, Kathleen Block Pearsall and Jacqueline Block Sellers.