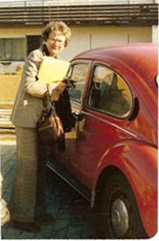 Those who saw our dear friend Ruth in Salt Lake City, still a joking 84-year-old, were shocked by the speed of a cancer diagnosis and her death so soon after.

Ruth’s great grandparents journeyed west by covered wagon on the California Trail, which may have sparked the sense of adventure that brought her into DoDDS, in middle age, after raising her four beloved children. She nurtured all who came her way, and had a understated, comic sense of drama.

Following years in Bermuda, Cuba, Iceland and Bamberg, Germany, she applied for a Sabbatical at age 60, saying she needed to keep learning “like any other young girl”. Ruth enjoyed her adventure as a coed at George Washington University, living in an efficiency apartment in Foggy Bottom. She returned to Germany until her retirement from Gelnhausen. She saw age as no limiting factor, often traveling with her philosophy of “a little culture, a little shopping, a little food”.

Ruth always had an extra spark to share with new teachers, friends facing romantic heartaches, and children needing help. Whether her classroom was in a W.W.I mess hall, a defunct slaughterhouse, or an antique orphanage, Ruth took the world in stride, and helped her colleagues do likewise.

Her dramatic flair cheered us all. We never got to actually meet her “Ambassador”, but Ruth regaled us with tales of his devotion to duty with dramatic gestures and a chorus of her signature song – “Smoke Gets in Your Eyes”. Friends enjoyed her Valentines with photos of her “searching” for him on a camel in Egypt or in front of the men’s room. And no one could forget twelve hours in England, on a bus loaded with terrified, stranded passengers, buffeted by torrential winds and downpour, when Ruth held them entranced with her infamous “striptease” by which she somehow created the illusion while removing only a wool muffler and gloves!

That’s our Ruth – and all who were ever stationed with her have stories of her love of history, her sense of humor, and her devotion to our DoDDS family that we’ll never forget.