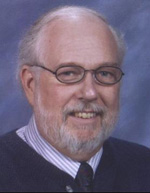 Ron was born in Ottawa, Illinois on December 22, 1945 to Charles and Naomi Leckrone. His parents named him Charles Ronald after his dad but he was always called Ronald or Ron. Shortly thereafter his family moved to Hammond, Indiana. Ron attended Lincoln Elementary school and George Rogers Clark, Jr. High School. He graduated from high school in June of 1964. He then went on to Purdue University where he graduated in June of 1968 with a Bachelor of Science degree in Math and Physics.

While in his first year of college he got reacquainted with Dian Leimbach. They both had attend the same high school. On August 10, 1968 they were married.

Ron’s first teaching position was in Pine Village, Indiana were he taught math. Since he was living on or near Purdue campus Ron also started working on his Masters of Science in Education degree which he earned in August of 1970.

In the spring of 1971 Ron applied and was accepted to teach with the Department of Defense Dependent Schools. Ron’s first posting was teaching math in the junior high at AFCENT. In November of that year his first daughter Carrie was born. Daughter Jennifer was born four years later in January 1975. While at AFCENT, Ron helped out with the boys’ wrestling and the cross country teams.

In August of 1976 Ron and family moved to Hoensbruck, Germany where Ron taught computer education at the Darmstadt Career Center. From there Ron moved into the position of computer coordinator for the DoDDS in Germany. At this time Ron oversaw the implementation of computers into the school curriculum. He worked hard seeing that teachers got the training that they needed to use this “new” tool in their classrooms. He no longer taught in the classroom but he taught the teachers so that they could teach their students. Many teachers will remember the computer workshops Ron helped implement.

In June of 1996, Ron took an early retirement from DoDDS. Jobs that he held once he retired from DoDDS include being a school computer coordinator, a Novel Engineer, computer consultant, and a grader for Educational Testing Services.

He passed away on April 16,2005, from the end stages of Chronic Lymphocytic Leukemia. He was survived by his wife Dian, his two daughters, Carrie and Jennifer, and his three grandchildren, Kelsey, Reece and Alan all belonging to Carrie. Since then a fourth grandchild, Ronald Layton, was born to Carrie in October, 2005.