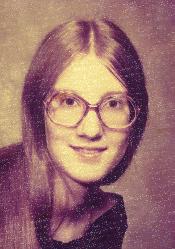 Robin Jayne Platenberg was born in Maquoketa, Iowa on June 22, 1955. At the age of two, she left the U.S. with her parents to live in Bremerhaven, Germany where her father worked for the DoD school system. She started kindergarten in Frankfurt Elementary School No. 1. She attended elementary schools in Poitiers, France and Mannheim, Germany. Robin attended Junior High School in Heidelberg and graduated from Heidelberg High School in 1974.

In July 1975, she married Frank Tanaka in Los Angeles, California. She had a son, Robert J.K. Tanaka on April 15, 1977 in Los Angeles. The family moved to Hanau, Germany and Robin attended the University of Maryland, European Divison in Hanau. A daughter, Raena J.K. Tanaka was born in Frankfurt on June 10, 1979. Robin was killed in a car accident in California on March 19, 1980.

In her short life, she brought much joy to her family, in her death, much sorrow. Her loss was felt by many. She is remembered for her beauty, her kindness and her loving dispostion.