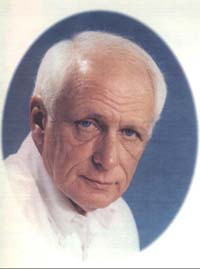 Robert William “Bob” Kaufmann was born Feb. 29, 1924 in Jersey City, N.J. He was a graduate of North Bergen High School and North Texas University, where he received his Bachelor’s and Master’s Degrees. Before attending college, Bob served in the United States Army during World War II in Normandy, Northern France and the Rhineland Campaigns. He received the European Service Medal, World War II Victory medal and Purple Heart with Oak Leaf Cluster.

In 1953, he joined DoDDS as a classroom teacher. During his 32-year career he served as an elementary and secondary principal. While working in Japan, Spain, Germany, Bermuda and England, Bob and his family were afforded the opportunity to enjoy wonderful travel experiences, some of his favorites being Russia, Morocco, Greece and France. On Dec. 12, 1971, he married Martha “Marti” Hollander in Aviano, Italy.

Bob was a man of many interests and talents. He sang and performed in theater and musicals. His favorite roles include “The Crucible” for which he won a Best Actor award in a European-wide military competition and “The Diary of Anne Frank,” in which he played the father of Anne Frank. He loved music. He played the drums and was the vocalist in a group called the Melotones who performed in and around Ruidoso, N.M. He played golf around the world and, in Sherman, loved being a part of the ‘Noon Game’ at Woodlawn Country Club. He was an enthusiast of all sports. (Submitted by Marti Kaufmann)