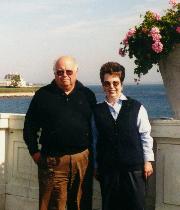 Paul Papineau began his career with DoDDS at Lajes American HS, Lajes AB, The Azores, Portugal where he taught English, French and Social Studies. After his first year there, he
married his hometown sweetheart, Helen, in 1962. He served as acting principal for a short period in 1964. They left Lajes in 1965 for Paul’s assignment as a history teacher at Dreux American HS in France. There a daughter, Theresa, was born. When NATO forces left France in 1967, they were transferred to Frankfurt Jr. HS, Germany.

After several summers and some night course work, Paul earned his MS in education in 1968, and became a Teaching Assistant Principal at Frankfurt HS. About this same time
a second daughter, Lisa, was born. 1969 saw Paul take on the assignment of Assistant Principal at Frankfurt Jr. HS. During his tenure in Frankfurt Paul experienced the problems occurring from terrorist activities of such groups as the Bader-Meinhof gang, which was captured a mile or so from the school; the introduction of the drug culture in the schools; and the Black Power movement. He was the organizer and moderator of a black student organization in the Jr. HS. In 1973 Paul accepted an assignment as Assistant to the Director of AFCENT School. He acted as liaison between the international office of the school and the four national sections which made up the school. In 1977, after 4 years in that position, the Papineau family moved to Nuernberg Elementary School #1 where he was assigned as Deputy Principal.

In November 1979 the call came to become the principal of Worms Elementary School. During his tenure there Paul was involved in the construction of a new addition. He was the convention chair of the European Congress of Parents and Teachers for three years. Paul was a founding member of the first European affiliate of the National Association of Elementary School Principals. He was a member of PDK, the Overseas Association of Dependent School Administrators and the Federal Managers Association. He suffered a heart attack in 1986, and following bypass surgery, continued his principalship until his retirement in January 1991.

Paul and Helen are now retired in Woonsocket, RI.