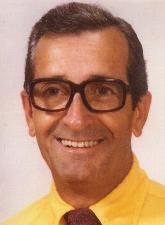 Born in Westerly, Rhode Island on April 18, 1920, Patrick Visgilio is one of ten children. He is an avid New Englander who roots for the Boston Red Sox, the Patriots (along with Notre Dame) and the Celtics. He earned his BS degree at Emerson College in Massachusetts. Post graduate work was done at Boston College, and Pat earned an MA degree from Wayne State University.

In 1957 after teaching locally, Pat applied for a teaching position with DoDDS and went to Wheelus Air Base in Libya where he taught social studies and coached soccer. He was hooked on teaching overseas!

From Wheelus Pat transferred to Germany, and was assigned to Ramstein Air Base, then to H. H. Arnold H.S. in Wiesbaden. There followed moves to Ankara, Turkey and Seville, Spain. Throughtout his assignments, he taught speech, social studies and English, often organizing speech contests in these districts.

While in Wiesbaden he met the former Gail Thelin who was teaching at Lindsey Air Station. They married in Basel, Switzerland in August, 1966. With Gail he returned to Ankara (1966-67), then moved to Aviano Air Base, Italy (1969), where their first son, Patrick Thelin Visgilio was born. Pat and family returned to Wiesbaden where their second son, Van Pirri Visgilio was born in 1973. Assignments to Torrejon Air Base, Madrid, Spain (1974-76), Okinawa, Japan (1976-80) and Zweibrucken Air Base, Germany (1984-90), followed. Pat retired in 1990.

For Pat and his family, living and teaching overseas has been an extraordinary adventure filled with enduring friendships, memorable places, wonderful students, terrific educators, and now AOSHS, which will record for posterity
this grand time!