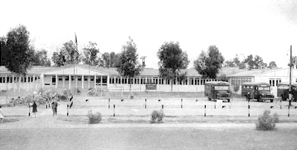 "home Of The Hellcats"
Opened 1951 - Closed 1963
Located 18 Miles South Of
Casablanca, Morocco, On
Nouasseur Air Base.
Capt Brown Was School's
Officer Killed In 1956
During Local Revolution.

In the beginning, elementary classes were held in two leaky, wooden prefabricated Dallas huts, while high school students were tutored separately using University of Nebraska correspondence courses. In January 1954, the school moved to larger quarters in TCV, an area originally built to house Corps of Engineers and Atlas construction personnel.

Many of the original students commuted from the Casablanca area in buses–often accompanied by armed guards. Dormitory facilities were available for students who came from other nearby cities and bases like Rabat, Sidi Slimane and Ben Guerir. Our school team was named the “Hellcats” and school colors were blue and white. In June of 1953, ten students participated in the first American high school graduation in Morocco.

On graduation day, 1956, the school was renamed the Nelson C. Brown School in honor of the School’s Officer, Captain Brown, who was killed at a road block that year during the Moroccan revolution against the French.

The school closed its doors in 1963 with the closing of the base and with a graduating class of twenty-seven.

The Nouasseur Air Base area is now the site of Casablanca’s Mohammed V International Airport. The school building no longer exists.