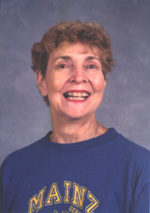 Loving Wife - Mother - Grandmother.
She Was A Positive Influence Upon
All Who Came In Contact With Her,
Personally And Professionally. Gone
But Not Forgotten, Our Beloved Mom.
A Parent And Teacher Whose Spirit
Is Cherished And Remembered. She
Was Courageous And Will Always Be
Dearly Missed.

Martha (Marti) Jean Spear was born April 22, 1928 in Carbondale, Illinois, where she attended grammar and high school, graduating in 1946. She attended Southern Illinois University (SIU Carbondale) graduating in 1950 with a BS in Education. Her major was health and physical education, her minor, English. She was a member of the Madrigal Singers and very competitive in basketball and field hockey. Marti’s first teaching position was at Cerro Gordo H.S. in Illinois. She was girls’ physical education instructor and sponsor of the Girls’ Athletic Association (GAA).

From 1952 to 1956 Marti taught health and physical education at the elementary school level in Cahokia, IL, a famous state historical site. (At this site the Indian Chief Pontiac was assassinated, and George Rogers Clark negotiated for Indian neutrality during the American Revolution). She also provided teaching instruction to elementary schools in Chartrand, Centerville, and Maplewood as an itinerant teacher.

Marti left teaching in 1957 and served as Service Club Director in Bad Nauheim, Germany for the U.S. Army until 1959.

From 1959 to 1960, Marti was a lecturer at Southern Illinois University (East St. Louis Branch). On June 6, 1959 Martha Jean Spear wed John Dal Santo at the Holy Family Church, Cahokia, IL. (The church, built in 1699, was dedicated as a national landmark by the National Park Service in 1971) Their children include son Frank B. Dal Santo, M.D.,D.D.S. and daughter-in-law Elena Dal Santo, D.D.S.; daughter Bettina L. Dal Santo; daughter Katrina Jean Davis, son-in-law Keith Eric Davis, and grandson Jacob Eric Davis. All three children graduated from Nurnberg H.S., classes of 1978, 1981 and 1982, respectively. The high school principal during this time was their dad.

When Marti returned to teaching, she served at schools in Nurnberg, Osterholz-Scharmbeck, Delmenhorst, Soergel, Wiesbaden and Mainz, Germany. In 1992, she received an MA in Education with a major in curriculum instruction from National/Lewis University, Evanston, IL. The photo shows Marti in her Mainz Elementary School ‘Roadrunner’ T-shirt. She was diagnosed with cancer in November 1994 and retired in March 1995.

After two and one-half years of chemotherapy, radiation and numerous operations, Marti succumbed to ventricular fibrillation on November 22, 1997 at M.D. Anderson Cancer Clinic in Houston, TX. During this time, Marti volunteered for numerous experimental projects associated with cancer research related to finding a cure. After cremation, her ashes were scattered in the Riverwalk and Bay in San Antonio and Galveston, TX, respectively. She will never die because she will never be forgotten.