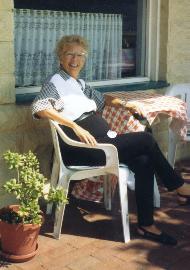 Margaret Elinor Jillson, fondly known as ‘Jill’ by her many friends and colleagues, was born in Ithaca, New York, on June 11, 1923. She was a Naval Officer in World War II and a highly respected teacher with DoDDS for 34 years.

Jill began her DoDDS career in Japan in 1958 and then transferred to Spangdalem, Germany where she taught from 1958 until 1960. Her later transfers took her to Evreux, France, from 1960 – 1964, Upper Heyford, England, 1964 – 1968, Aviano, Italy, 1968 – 1985, and finally to Bahrain 1985 – 1990. She retired from Bahrain on November 17, 1990. Jill’s career spanned the Elementary grades and the Gifted and Talented educational fields. She touched and enriched her friends, students, and colleagues with her sharp wit and delightful laughter. Jill was a credit to her profession and is mourned not only by her DoDDS friends but also by the many foreign friends and colleagues she associated with in her overseas assignments. She was a true ambassador of American education in a foreign country. Each assignment was an opportunity for Jill to become immersed in the local culture.

She retired to Sarasota, Florida, and immediately became active in social and civic groups. A Celebration of Life, sponsored by her local and DoDDS friends, was held and a scholarship fund in her name has been established by the Sarasota School Board Community Foundation for Elementary Education teachers.