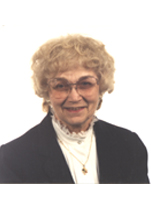 Lucy Johnson was born January 14, 1921 in St. Francis, Kansas, and on February 14, 1997 was involved in a fatal car accident in Litchfield, Michigan. Her BA and MA were earned at Drake University, Des Moines, IA. She was a charter member of Delta Kappa Gamma Society, International Tau Chapter, which was founded in Des Moines on April 17, 1953.

Her teaching career took her to one-room schools in Clark and Polk counties in Iowa. In 1953, she accepted a Department of Defense teaching assignment to Stuttgart, Germany, followed by two years in Japan. She then returned to Mainz, Germany where she remained for the rest of her 42 years teaching abroad.

In 1960, sister Doris joined her for extended travel in Europe and visits to Moscow and Leningrad.

An essential member of the Overseas Education Association, she was secretary of the Far East Education Association while in Japan. She continued in Europe as chairman of OEA’s Long Range Planning Committee as well as OEA president from 1961-64 and again in the late 60’s. She served as OEA treasurer in the mid-60’s, and again became treasurer from 1971-75. In 1967, she and other OEA leaders pressed the Department of Defense to request adequate funding for the overseas schools. She was chairperson of a teachers’ council within USDESEA, and later played a vital role in the Court of Appeals decision that implemented Public Law 86-91. This gave teachers an equitable salary, allowed them to receive 10 years’ back pay, and established the correct procedure for setting the overseas teacher salary schedule.

In 1960, the OEA Journal carried the story of Maude-Ellen Zimmerman presenting the prestigious Scholl Bell award to Lucy. We will remember Lucy’s contributions to NEA-OEA and her devotion to students and educators with whom she worked.

Lucy was “One in a million”, a lady we can never forget!