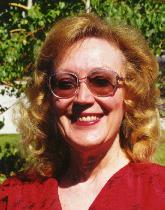 The daughter of Henry and Ruth Doris Hiebert, Linda was born in Newport, WA June 12, 1945. She lived there through grade 9 when the family, which included two brothers and four sisters, moved and Linda graduated from Aberdeen HS in Aberdeen, ID. She earned a BS in Education/English at Bethel College, North Newton, KS, and was a member of Beta Kappa and the Student Christian Fellowship. From 1967-69 Linda taught grade 5 in Topeka, KS, and was active in community theater. In the summer of 1968 she served as a tutor in East Harlem Protestant Parish, NY, and in the summer of 1969, as director of high school church camp at Gulf Coast, MS.

In 1981 Linda and Christopher moved to San Jose, CA. She worked for 4 years doing contract office work. In 1986 Linda was declared legally blind due to macular degeneration. She then became an English examiner with the Center for Southeast Asian Refugee Resettlement. From 1988-2000 Linda was a special education teacher of profoundly mentally retarded teenagers at Agnews Developmental Center. During this time she also served as Commissioner of the Santa Clara County Commission on the Status of Women. On July 8, 1990, husband Christopher died from complications following heart transplant surgery at Stanford Medical Center.

Spanning these years Linda has been active in the American Association of University Women(AAUW). She has served as president of the San Jose branch, president of the Santa Clara County Interbranch, on several CA state committees, and in April ’99, completed funding the Christopher Stewart and Linda Hiebert Sekiguchi International Fellowship, an AAUW Education Foundation Endowment. She is a life member of AAUW and the National Education Association.

In 1992 Linda met her current partner, Bruce E. Mitchener. From 1997-99, she was on the Board of Directors and president of Ten Thousand Villages in Los Gatos, CA, a Third World handicraft sales/job creation program sponsored by the Mennonite Central Committee. In March 2000, Linda established a gift annuity with this committee.

Linda retired from teaching in November of 2000 and in January 2001, she and Bruce moved to Minden, NV.