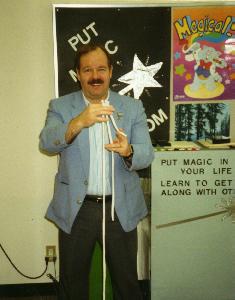 Larry graduated from Farmington State Teachers College, Farmington, Maine in 1964 with a B.S. in Education. He
received his Masters of Education in Educational Administration from the University of Maine, in Orono in June of 1967. He went on to receive a Certificate of Advanced Study from UMO in December of 1976 with a major in Guidance & Counseling.

Larry is an amateur magician providing presentations at national (New Mexico) and international (Hong Kong) guidance conferences, but is most proud of his work in the classroom where he uses magic to establish rapport with elementary school children. He believes the purpose of elementary school guidance is to be of service to all the students. To accomplish this Larry goes into the classroom and gives presentations. Topics include: getting along with others, conflict resolution, stress management, handling put-downs, handling anger, peer pressure, drug education, decision making and career exploration. With each presentation a magic trick is used to help illustrate the lesson being taught.