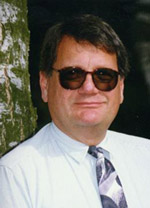 Larry’s career in DoDDS began in 1962 when he accepted a teaching position at Kaiserslauterrn Elementary School. Six years of teaching in Miami Beach, Florida, had not only nurtured his love of helping children learn but also whetted his appetite for international travel. At that time Cuba was still accessible and provided an easy escape to adventure.

In that first year in Germany he swept Lois Coffman off her feet and they were married in the fall of 1963. Meanwhile Charles Jenkins was encouraging Larry to try administration.

Braconne and Captieux were the sites of two small schools in southern France where Larry had his first experiences as a principal. It was a fantastic year filled with adventures with the French community: a truffle hunt, visits to wine chateaux, excursions to the French coast and into Spain. That all ended abruptly when De Gaulle ousted foreign troops from French soil and the schools were closed. Two years later Larry was again faced with closing the schools he had served at Landshut and Dachau in Germany.

The spring of 1968 brought new hope when he moved to SHAPE Elementary School. Larry and the schools established on the SHAPE (Supreme Headquarters Allied Powers Europe) compound were intimately intertwined for 27+ years. He came to the “school within a school” in 1968 as principal of the U.S. Section, a U.S. military dependents’ school sharing an international campus with 13 other schools representing 8 nations. The international school was newly formed and in its developmental stage. His contribution to the establishment of cooperative teacher and student interaction, the sharing of common facilities, and the esprit de corps among staffs is well known and acknowledged by both students and professional educators. In 1975 it was his choice to return to the profession closest to his heart, that of classroom teacher at SHAPE American Elementary School. He will be forever remembered by staff and students as a dedicated teacher whose positive influence is not bordered by the passing of time. “The most important thing is to be there,” -and he always was.

Larry loved good food, good wine, good beer, sports, and animals, but most of all he loved teaching.