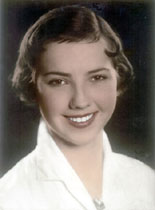 Judith Ann Chapman was born February 21, 1940, in Mangum Oklahoma. Judy attended 10th grade at H.H. Arnold High School, Wiesbaden, Germany, 1955-56, and would have graduated with the Nouasseur Class of ’58.

This tragic loss was felt throughout the small base community. Friends and family still mourn and wonder what these wonderful young people might have accomplished in a full lifetime.

Photos of Thomas E. Lewis and James E. Snyder, the other two students killed in this accident, can be seen by returning to the alpha roster and highlighting their names.