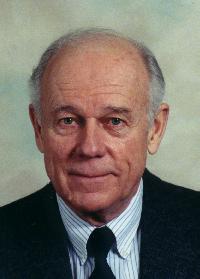 Joe Was Admired For His Warmth,
Sense Of Humor, Dignity And
Dedication To Quality Education For
DoDDS Students. His Love Of Life,
Courage, Compassion, Integrity,
Humility And Gentle Strength Will
Remain A Source Of Inspiration For
Those Whose Lives He Touched.

Dr. Joseph Henry Blackstead (Dr.B) was born in Minot, North Dakota on July 14, 1924. During the Depression his family moved to Standing Rock Indian Reservation in Fort Yates, ND where his father worked for the WPA. Joe attended Fort Yates High School where he excelled in sports, academics and leadership. However, he also experienced firsthand the educational deprivation suffered by the Indian students. It was then that he decided to become a teacher and dedicate himself to providing quality education to which all children are entitled.

Joe entered the University of North Dakota on a football scholarship, but his education had to be postponed for a hitch in the Navy during World War II. He served in the Pacific as an executive officer on a Landing Transport Carrier(LTC). After the war he completed his BA at the University of Portland in Oregon and started his first teaching job. It was while living in Portland that he played golf for the first time at the beautiful Glendoveer Golf Course, and a lifelong passion began.

In 1952 Joe joined the overseas military school system in Nurnberg, Germany as a math teacher and coach of football, basketball and baseball. He was joined there by his wife Betty and daughter Bobi. While in Germany Joe’s daughter Libby and son Joey were born. Several years later his daughter Trish was born in Japan. In 1990, after a very long illness, his wife Betty passed away.

Joe’s original intent was to teach for one year in Germany, then spend the summer in Spain on his way back to the U.S. That one year turned into a 42-year career which included the following positions:

Joe completed his MA at the University of Oregon in 1962 and his doctorate in Educational Administration at the University of Arizona in 1973. He was highly praised for his doctoral dissertation which was not only scholarly, but of practical application to the NCA and DoDDS. He received several awards and honors, among them: the NCA’s John W. Vaughn Award for Excellence in Education, and the 1992 Phi Delta Kappa Educational Administrator of the Year. He was listed in “Who’s Who In American Education.”

In November 1992 Joe married Dr. Barbara Dubnick, a guidance counselor at Frankfurt Elementary School and former DoDDS teacher and school psychologist. When Joe retired in November 1994, they returned to the U.S., dividing their time between Chandler, Arizona and Vancouver, Washington. To fulfill a dream he had since the days of Glenn Miller and the big band era, Joe began learning to play the trombone Barbara gave him as a retirement gift.

Sadly, after suffering for several years with rheumatoid arthritis, Joe passed away on May 17, 2000.

Joe will be remembered as a dedicated and innovative educator who devoted his professional career to improving the quality of education for American students in both the U.S. and abroad. In his professional and personal life he was admired for his warmth, sense of humor, and dignity. Joe’s love of life, courage, compassion, integrity and humility will remain a source of inspiration for those whose lives he touched.