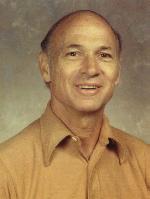 Basketball Coach And Teacher In
Morocco, Turkey, France, England
And Germany From 1959-1988

Dedicated With Love By His Wife

John was born and grew up in Trenton, Illinois. He graduated from Illinois State University where he was on the basketball team and the cross country squad.

He served in the U.S. Army during the Korean War. On his return he taught P.E. and history at Aviston and Chicago, Illinois.

John began his overseas career in Casablanca, Morocco in 1959, and worked in a total of ten DoD schools until his retirement from Sembach, Germany in 1988. He thoroughly enjoyed his overseas career and felt very privileged to have been associated with DoDDS. During his career, he taught P.E. and Social Studies, as well as coaching several sports, the chief one being basketball.

The height of his coaching career came in 1972 when he was basketball coach for the Mannheim HS “Bisons” in Germany. In the past few years they had been soundly trounced by the all-powerful Heidelberg HS team, who had won three straight Class A crowns. John knew he had to make changes in his team’s game to beat them. That year, the Bisons won ten league games and suffered only two defeats, but they still had Heidelberg to defeat in the final, which seemed an impossible task. However, they prevailed and the stunning upset was labeled “the biggest surprise in USDESEA basketball.” John earned the Stars and Stripes ‘Coach of the Year’ recognition as well as the moniker of “the sly old fox” by Stars and Stripes sports reporter, Ben Abrams.

He went on to London Central HS, England and Frankfurt HS, Germany where his teams won the U.K. title and two league titles.

John met his wife, Elizabeth, in England in 1974. After retirement, they settled in Florida. Sadly, he lost his courageous battle against pulmonary fibrosis in March 1995.