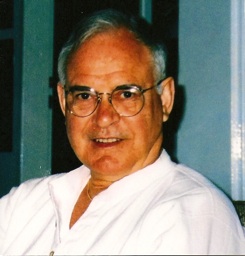 Thanks For The
Memories

John spent his childhood in Bend, Oregon – or nearby on a ranch on the Deschutes River. He earned his BA from the University of Washington in 1948. He joined the Army Air Force and served as a decorated officer in the Korean War, where he was known as “The Kosa Kid”. After his discharge he returned to the University of Washington and received a Masters of Fine Arts degree in oil painting. A few years later, he completed a second masters program at Ohio State. He began teaching in Gig Harbor and Everett, WA, where he met and married Nancy Peterson.

John began his overseas career in 1959 in Poitiers, France. Subsequent assignments were in Wurtzburg, Zweibrucken, Kaiserslautern, and Sembach, Germany. He also taught for the University of Maryland for several years, continuing after he retired from DoDDS in 1989. His classes visited and studied great works of art and architecture all over France and Germany.

In 2001, John moved to Bradenton, Florida. There, John was an active, fervent Democrat. He was an avid opera and theater buff, and loved swimming, picnics at the beach, entertaining friends, and good food and wine. He was a colorful storyteller and was always ready to laugh. He delighted in Florida sunsets across Sarasota Bay, especially when he could share them with good friends and a scotch.

John is survived by two sons, two daughters, twelve grandchildren, and many many friends whose lives were enriched by knowing him.