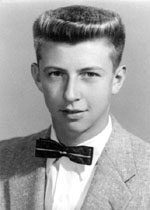 Photos of Judith Ann Chapman and Thomas E. Lewis, the other two students killed in the accident, may be seen by returning to the alpha roster and highlighting their names.

To view the list of contributors, return to the alpha roster and highlight the Nouasseur/Chapman, Lewis, Snyder Mem.