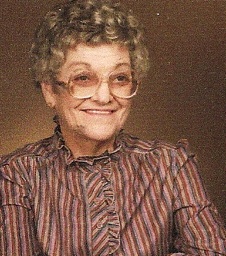 Irma Updegraft was born on March 10, 1920, in Minnesota and was residing in Wakulla, Florida, when she passed away on December 18, 2007. She taught for one year in Winters, California before starting her career with DoDDS in the late 1950’s. Her first assignment was in Japan at Johnson Air Base. She worked in mainland Japan until 1972 when she was assigned to Okinawa. For the next 3 years, she served first as principal of Naha Middle School, then Tyler/Eisenhower Schools, and finally Kadena Middle School.

From Okinawa, Irma moved into the DSO at Yokota Air Base where she worked closely with the Superintendent on personnel matters. Irma’s last assignment was at Clark Air Base in the Philippines where she was principal of Wagner Middle School.

After careful research of areas for retirement, Irma selected Tallahassee, Florida. Although she did not travel often after her retirement, she kept in touch with her friends through notes and letters. In her quiet way, Irma touched the lives of many students, educators and friends during her long career with DoDDS.