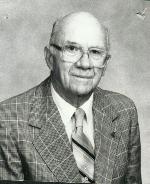 Herman Dickenson Search was born December 15, 1908 in Pittsburgh, Kansas. Following graduation from high school, he attended Fort Hays State College earning his BS in 1933, and his MS in 1939. Herman taught at Hill City HS, Osborne HS and Russell HS. In 1941 he became principal at Russell until 1943 when he entered the U.S. Navy. After leaving the Navy he was again principal at Russell HS from 1946-48.

During World War II Herman served as an officer and was assigned to the U.S. Navy Air Transport Command in the Admiralty Islands and later at Samar, Philippines.

Herman retired from Federal service on Sept. 4, 1981 to Ft. Collins, CO. He had been an active member of Phi Delta Kappa since 1975. In retirement he was a member of the Ft. Collins Optimist Club. Herman passed away on August 28, 2000 and is buried in Hutchinson, Kansas.

Prepared from the archive files submitted by Herman Search.