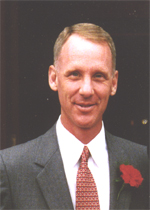 Greg Block was born in Philadelphia, Pennsylavania, into an Army family that traveled at home and abroad following the course of his father’s military service. He attended elementary schools overseas and was graduated from Monmoth Regional HS, Tinton Falls, NJ. Greg received his undergraduate education at Washington State University, earned a Master of Science degree from the University of Southern California and was awarded a JD from Seton Hall University School of Law. Gregory also has earned an LLM in Military Law from the Army Judge Advocate General’s School in Charlottesville, VA.