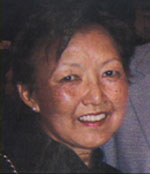 Born Hiroko Watanabe on April 22, 1944 in Dairen, Manchuria, she became Gloria Hiroko Lynch in 1952 upon the marriage of her mother, Setsuko, to Edward J. Lynch, an American DoD civilian stationed in Tokyo. Gloria attended Tachikawa Elementary and graduated from Yamato High School in 1963. She became very active in the life of her schools, serving in numerous clubs and committees, in the National Honor Society, and as a class officer. Her intelligence, beauty, charm, and all-encompassing friendliness won the hearts of very classmate and she was elected “Miss Yamato” in her senior year.

Gloria earned a B.A. in English from Tokyo’s Sacred Heart University in 1967, then came to California where she took a job in San Francisco as a customer service interpreter for American Airlines. In 1972 she moved to Los Angeles and began work as a secretary for that city’s community Redevelopment Agency.

In 1978 Gloria married Randy Uchida of Santa Monica, California, and continued to be active in the life of her church and her community. Although she was diagnosed with cancer in 1998, she continued her life with courage, grace, and cheer, and made it a point of honor to attend the 40th anniversary reunion of her Yamato Class of ’63 where she shined brightly among her friends of long ago.

Gloria passed away on March 2, 2005. She is missed by her family and friends more than she, in her true modesty, would ever have believed.