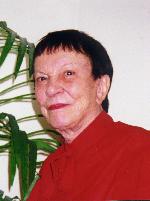 Genevieve Fouquet was born in Orleans, France in 1917. When she was 15 her mother passed away two weeks after giving birth to her youngest sister, so she became the caretaker of her siblings. She attended local schools and was graduated from Sacre Coeur. In 1939 she moved to Paris and worked for the firm of Julien Demoy, a food company, for eleven years and served as personnel director before emigrating to the United States in 1952. During WWII, Genevieve worked for the French Resistance, and from 1941-1945 supplied food weekly for 3 Jewish men hidden in an attic in a house in Paris. She did this by buying her rations for the week, eating lightly Monday through Friday, then each weekend, she went to stay with her family in Orleans; thus she was able to provide the food she had saved during the week plus what she would have eaten on the weekends. Also, her father was a miller, and she was able to provide extra flour to the Paris house on occasion.

Genevieve came to the U.S. working as a companion to the wife of the president of Coty cosmetics in New York City. After a year, she left to take a similar position with the actress Mary Pickford, relocating to Los Angeles and living at Pickfair. After several months she left Ms. Pickford’s employ, and then worked for Joan Crawford. She was hired to coach Ms. Crawford in the French language for a film role, and also tutored her children.

In 1954 Genevieve entered Pasadena City College. She eventually transferred to Immaculate Heart College in Los Angeles, earning her BA and teaching credential in 1962 and her MA in 1965. While earning her degree Genevieve taught at the French Foundation Saturday School in Pasadena, at Marlborough School for Girls and at Immaculate Heart High School. After earning her credential she taught in the public schools in Los Angeles, first at Jordan High School in Watts, and later at Fairfax High School.

In 1969 Genevieve applied to teach in the DoD overseas schools and was assigned to Kaiserslautern High School in Germany as a French teacher. She remained in Kaiserslautern during her entire 17 year career with DoDDS.