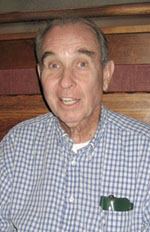 G. D. was born in Florida, went to local schools and, after high school, entered the University of Florida in Gainsville. In January 1951, after the first semester of his sophomore year, he enlisted in the U.S. Army with the 11th Airborne Division. While in the Army he was given the nickname of G. D. (Gordon Dewey) as there were several other men in his unit named Robert. He was honorably discharged in 1954, returned to the University of Florida and graduated with a BA in Education. In the summer of 1957 he entered the American University and over the next three years earned an MA in Economics, received his teaching certificate, and completed his student teaching.

G.D. joined DoDDS in 1960 and taught in Japan, Spain, Turkey, Germany, England, and the Philippines. While in Japan he met and married his wife Fuki and adopted her daughter Ann. Their daughter Flora was born in 1968.

When G.D. was in the army, he learned to skydive and truly enjoyed it so during his second assignment in the Philippines, he joined the skydiving club at Clark AFB. For many years, at Christmas, Santa arrived at Clark by parachute – thanks to G.D.

G.D. retired from DoDDS in 1987 and settled in New Orleans where he continued is interests of fishing, poker, classical music, history, watching professional wrestling and skydiving. He was killed July 22, 2006 in a fatal skydiving accident while making his 2255th jump.

Those who knew him were constantly surprised by his perception, so often revealed by a quiet sense of humor.