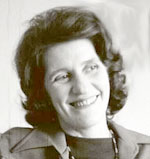 A native of Johnstown, PA, Lin was born 9 February 1933. She was one of the three children of Mr. and Mrs. Joseph Chuha. After graduating from the University of Pittsburgh, she taught in Ohio and Johnstown before joining our DoDDS family. She once remarked that her teaching in Ohio, where two different classes met in the gym at the same time- and neither one was a P.E. class, was good preparation for life with DoDDS.

Lin began her overseas teaching career in 1960 at Lakenheath H.S. where her classroom was close to the runway. When the jets took off or landed, recitation had to stop momentarily. In 1962, after two years in England, her two-year leave of absence was up and she was packing to return to Johnstown when she was offered a transfer to Wiesbaden, Germany. H.H. Arnold High School was to become a second home, for she remained there teaching French and English until her retirement in 1997.

Lin was an integral part of life at Wiesbaden High. Her quiet smile welcomed and calmed students and friends alike. She participated unassumingly in the activities which do not bring the recognition and applause of the crowds. She volunteered for crowd control and ticket-selling for track and for wrestling. Her noon hour was spent day after day working with the team for the Brain Bowl. She took trips with the French Club to Paris and later was instrumental in the formation of The Melting Pot, a club for students of all the languages, but also open to students of diverse nationalities who attended Arnold. Her extracurricular work did not receive the extra pay, but it built self-confidence in her students through achievement. Lin’s enjoyment in her teaching and mentoring of her students precluded any desire for “promotion” which would take her out of the classroom and away from the daily contact with young people.

She was an active member of the Wiesbaden chapter of the Overseas Federation of Teachers.

Lady Lin shared her love of beauty and art with her husband, Jack. Together they searched for and found antiques for the apartment that they had made into an inviting refuge.

When Lin retired in 1997, her “two-year sabbatical” had turned into a thirty-seven year DoDDS career. She and her husband, Jack Esztergalyos, arrived back in Johnstown shortly before her death on 11 September 1997.