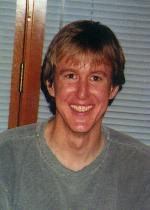 Duncan Weir
1964-1998
Cab,philippines
A Joyous Spirit
That Lives On

Duncan Weir, the son of DoDDS educators Bob and Cathy Weir, was born in the Philippines and educated at Clark Air Base Schools. He completed his overseas education at Wagner High School where he was at the top of the Class of 1982. In 1986, he graduated magna cum laude from Washington University in St. Louis with degrees in electrical engineering and computer science. He went on to become a highly successful chip designer at Hewlett Packard in Ft. Collins, Colorado. He worked as a counselor at the Easter Seals Handicamp, and was an avid cyclist, soccer player, skier and marathon runner. Duncan and his wife Barb loved mountain camping and hiking with their dogs. They enjoyed several Caribbean sailing and snorkeling adventures.

Duncan had a knack for gaining great pleasure from the little things in life. His nieces and nephews knew they could count on him to join in their play at every family gathering. Family and friends were a priority for Duncan, who over the years, maintained close relationships with his parents and sisters Cindy, Noelle, and Heather. He had a tremendous positive impact on those around him, helping them to feel comfortable and to succeed. A book about Duncan, prepared by Hewlett Packard associates and friends, tells not only of his significant contribution in the area of computer chip development, but also of his personal impact in the lives of those who knew him:

“I member his friendliness and sincerity.”
“He added a lot of humor to the workplace. It seemed like he was always in a good mood.”
“Duncan had a youthful exuberance for life.”
“I never saw Duncan angry or stressed out—ever.”
“He was genuinely interested in people.”
“Duncan had his priorities straight.”
“He had a willingness (and ability) to help out with any problem.”

The dedication of this book reads as follows:

“In honor of a dear friend whose loss has left an irreparable tear in the fabric of our lives. Though he is no longer with us, his joyous spirit lingers; memories persist; laughter remains. We are grateful that we had the chance to witness his rare and beautiful soul.”

Though Duncan died at age 33, his life and memory continue to strenghten and inspire all who knew him.