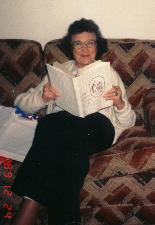 "chris" Extended
Her Heart And Her Hand
When We Needed Her Help!

“Chris” was born in Harrison County, Missouri, and died on her 89th birthday, August 22, 1998 in Washington, D.C., while attending the International Education Conference where she received a commendation from Hillary Rodham Clinton for her dedication to international education.

A graduate of Northwest Teachers College in Missouri with a BA degree, she earned her MA degree from Colorado State College. A DoDDS teacher for 40 years, she began in 1948, spending five years in Yokosuka, Japan, and thereafter in Frankfurt, Germany. A teacher for more than fifty years, she had previously taught in Cheyenne, Wyoming, where she chose to retire and be buried.

As a strong, determined, dedicated leader of the DoDDS teachers, she helped form the Overseas Education Association in 1956, and then became Chairman of Area X of OEA (the Frankfurt area) in 1960. Later, she served as Membership Chairman of OEA from 1960-71, and President of OEA from 1971-74. For over a decade, Chris, Cecil Driver, Lucy Johnson, and numerous others vigorously defended and won the Teachers’ Back Pay Suit, PL86-91, November 12, 1974.

She became an “ambassador” for the United States by interacting with foreign national school children through classroom activities, and after retirement kept in touch with school host nation personnel through correspondence and visits to their countries.

In retirement Chis represented the DoDDS retirees at NEA conventions, and also managed to keep in contact with those who had been her colleagues and friends. Politics being part of her life, she consulted Washington by phone practically every day! She became, and remained, a faithful supporter and a friend of the Clinton Administration.

We shall proudly remember Chris and her many outstanding accomplishments.