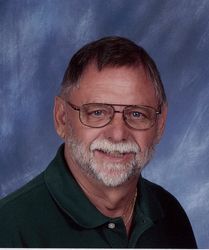 Austin was home for Chuck and he was always a big fan of the University of Texas Longhorns although he never attended UT. He graduated high school from Concordia, Austin, received his Bachelors Degree from Concordia, River Forest, IL and his Masters Degree from Phillips University, Enid, OK. He was a dedicated Lutheran school teacher and church musician for 15 years before joining DoDDS.

In 1974, Chuck, his wife Anna, and their young son Christian went to Taiwan for just one year. After a year as the music teacher at Jonathan Wainwright in Tainan, he transferred to Steven B. Luce in Tso Ying to teach speech and music for grades 6 and 7. A second son, Matthew, was born that year. The family moved to Birkenfeld, Germany and Chuck taught grades 5-6 at Neubruecke Elementary School from 1976-1980. Anna joined the staff in 1977 teaching Kindergarten. From 1980 – 1996 Chuck taught at Rhein Main Elementary School both music and grades 4-6. He was very successful with cooperative learning techniques. Later the school was named Halvorsen Elementary School.

Anna taught first grade and music. Christian and Matthew were DoDDS students from K-12. Both boys graduated from the University of Texas in Austin: Christian received a PhD in history from UT, Matthew a Masters Degree from George Washington University. Both teach at universities.

Chuck was active in all levels of PTA – local, council, district and state. As president of the European Congress of American Parents, Teachers and Students, he enjoyed representing DoDDS in Washington D. C. Other organizations he worked with included Phi Delta Kappa, ASCD, and the Advisory Council on Dependent Education.

Chuck was also known as a collector: souvenirs from traveling, sea shells, beer cans, Hummels, Anris, nativities and friends. He was happy with a full house.

After 22 years with DoDDS, Chuck returned to Texas. He was principal at Grace Lutheran School in Killeen, TX, for 3 years and retired in 1999 after 39 years in education. At the time of his death he was working as organist, choir director and bell choir director at Trinity Lutheran Church in Copperas Cove, Texas.

Chuck died from injuries received in a car accident.