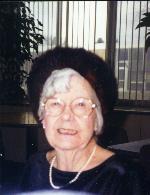 At the age of 54, Catherine embarked upon a new career as a teacher for the U. S. Department of Defense. Despite knowing no foreign languages, she traveled and taught children enrolled in DoDDS Schools in the Middle East, Europe and Asia. She ran with the bulls at Pamplona, Spain, rode elephants in Nepal, camels in Morocco and witnessed Christmas Eve celebrations in Bethlehem. She kissed the Blarney Stone in Ireland, climbed the Great Wall of China and attended the Swan Lake Ballet at the Bolshoi in Russia. Her sense of adventure was equal to none. Nothing was too great a challenge for this adventurous, fun-loving “gallivanting granny”, as she referred to herself.

Catherine, widowed at the age of 34, was left with three young children to raise. She raised Charmaine, Gary and Wayne, until they were ready to be off on their own. Then she applied to the Department of Defense overseas schools for a position. She called DoDDS to inquire if they had received her application and was informed that there was an opening for a kindergarten teacher on Okinawa. “I’ll take it”, she said excitedly. When she hung up the phone, she looked around and wondered, “My gosh, where is Okinawa?”

It wasn’t long before she began her life-quest for daring and fun adventures in many locations. In the ‘Lobster Quadrille’, from Lewis Carroll’s Adventures of Alice in Wonderland, the dancer is described as one who joins the dance and is not afraid to try new things, rather than the one who sits on the sidelines observing. Despite a setback with cancer surgery, and some minor ailments, Catherine continued to “dance”. She brought happiness and joy to many students, fellow educators and her family. She was a member of the Okinawa Writers Guild and often graced programs with her original poems and writings. Catherine wrote her own unique eulogy, read at her funeral by her daughter, Charmaine Stolzer Ragusa. This charming eulogy will be made available in the AOSHS archives.

Prepared by Carla Shank from material provided by Charmaine Ragusa