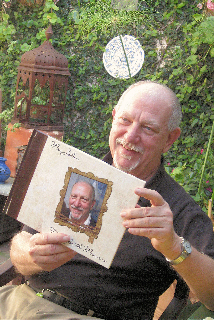 Carter Johns grew up in Lincoln, Nebraska. He graduated salutatorian from University High School and Teachers College of the University of Nebraska, majoring in art and social studies. He was curator of the Reserve Collection of Sheldon Gallery while obtaining his masters degree. In 1963, he began his teaching career in Orange County, California. In 1967, he received a federal Title II Humanities grant to George Peabody College in Nashville, Tennessee and earned another masters degree. Carter was accepted as a doctoral candidate at Columbia University, but chose to teach for the US Department of Defense overseas schools program. From 1968 to 1971, he taught at Kaiserslautern American High School, chaired its Humanities Department, and became active in the Overseas Federation of Teachers. He met his future wife, Ellen Albertson, a teacher from Palo Alto, California; they married in 1973 in Basel, Switzerland. From 1971 to 1980, Carter lived in Vicenza, Italy teaching high school on Caserma Ederle and for the University of Maryland. A daughter, Alessia, was born in 1977. Carter served as union representative and on the board of the Italo-Britanica Circlo. After a leave in Santa Fe, New Mexico, he returned to DoD teaching in 1982 in Rota, Spain at David Glasgow Farragut High School and City Colleges of Chicago, Ball State, and University of Maryland. Carter was union representative, taught a wide range of subjects, and sponsored many student activities, including the junior and senior classes and student publications. He was widowed in 1990 and retired in 1995 to San Francisco and Los Angeles, where he was a real estate investor and enjoyed his retirement and travel. Carter will be remembered as a truly outstanding educator, a compassionate friend, and a loving father.