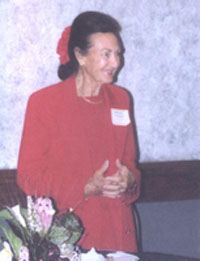 Be Kosina O’Donnell was born September 1, 1916, on a farm near Walker, Iowa. From the very beginning, Be K. forged her own destiny. She was salutatorian of her 1935 graduating class and recognized by Ripley’s Believe It or Not for her outstanding basketball skills (she scored 1500 points in 3 years and 60 points in one game!).

During World War II, Be K.’s volunteer services with the American Red Cross (ARC) and the United Service Organization (USO)led to an overseas ARC appointment in Newquay, Cornwall (UK). There she operated a “GI Donut Dugout” (1944), serving coffee and donuts to the soldiers.

From 1945 – 1947 Be K. was a United Nations Relief and Rehabilitation Administration home economist and “Hunger Fighter” in China where she worked to alleviate food spoilage, famine and hunger. She taught Chinese students the preservation of surplus foods in metal cans and the procedures for establishing community canning plants, thus ensuring a balanced diet for the people.

From 1939 to 1954, when not involved with Red Cross or U.N. work, Be K. taught junior and senior high school home economics and social studies in Iowa, Idaho and Texas. She joined DoDDS in 1954 as a teacher in Rochefort, France, and Munich and Stuttgart, Germany. In 1991 she retired to Winter Park, Florida, where she was an avid golfer. She was even recognized by Golf Digest for making a hole-in-one!

She is a member of UNA-USA and the Episcopal Church. Her contributions and years of service to our society have affected the lives of many people, both domestically and abroad. Be K. is admired for her style, her courage and, most of all, the grace with which she interacts with others.