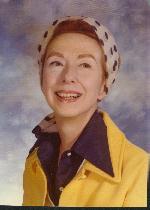 Barbara Hoeller was born May 8, 1923 in Hollywood, California. She was raised in the area and following high school, attended college, receiving her BA and MA in Business Administration.

Barbara started her career working for David O. Selznick and she remained at Columbia Studios for 20 years as an assistant producer. During this time she married and her daughter Barbara was born in 1947. She divorced, remarried Stephan Hoeller-Bertram, a descendant of the Hungarian Hapsburgs, and was later divorced again.

Barbara had always been a gifted pianist and after leaving Columbia Studios, she attended Immaculate Heart College, earning an MA in music. She began her teaching career as an elementary music teacher in 1965 in Los Angeles. In 1969 Barbara began a 17-year career in DoDDS. She went to Trier, Germany for one year, then to Kaiserslautern Elementary School for the remainder of her tenure with DoDDS.