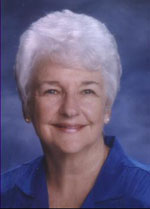 Ann was born in Buffalo, NY, and her family moved to California when she was a junior in high school. Following graduation from Whittier College, Ann taught in California before joining DoDDS in 1964. From 1964 to 1974 she taught grades 6 to 9 in various years in Wiesbaden and Hahn, Germany, at Clark AB in the Philippines and in Harrogate and Lakenheath, England. While in England, she earned an MA in education. Ann became an administrator in 1974 and served at high schools and elementary schools in London and Alconbury, England; Kaiserslautern, Germany and SHAPE headquarters in Mons, Belgium. During this time she earned an Ed.D. in Educational Administration and Supervision. Ann served on five North Central Accreditation (NCA) evaluation teams, was a three-year I/D/E/A Kettering Foundation Fellow, and served as president of the BENENOR Chapter of Phi Delta Kappa, an educational fraternity. In 1984 Ann became District Superintendent in Okinawa, Japan and in 1988 was selected to serve as District Superintendent in Heidelberg, Germany. She retired to Arizona in 1994.

Ann joined the AOSHS board in 1996 and served on the site selection committee to find a home for the Historical Park. In 1999, after careful research, she and Lee Davis began the Memorial Program, a personal purchase of bricks or pavers for someone living or deceased, and the Memorial Fund, where several people make contributions towards the purchase of a brick or paver for a deceased honoree. Ann became First VP of AOSHS in 2001 and was selected as president in 2002. Her term ended Sept. 1, 2005 and she retired, having served nine years on the board.

Ann is a life member of Phi Delta Kappa (PDK) and the National Association of Retired Federal Employees (NARFE), as well as a member of AAUW. She plays tennis and reads for relaxation, and still enjoys traveling.