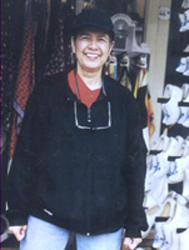 Ana Marie Davila was born November 3, 1949 in Hidalgo, Texas. She grew up in Hidalgo and received her BA from Texas State University and a MA from National-Louis University in Heidelberg, Germany. Her first teaching experiences were in Kyle, San Marcos and Houston, Texas before joining DoDDS in 1981.

Ana’s first assignment was at Wetzel Elementary School in Baumholder, Germany. She enthusiastically embraced Europe, travel, and collected friends wherever she went. She loved life and shared that positive view with everybody. Throughout her professional career she was committed to working with children with special needs who benefited greatly from her love and dedication.

Ana was a bonafide globetrotter, crossing the world five times. From Baumholder she moved to Japan where she worked in Misawa at Sollars Elementary School and Yokosuka at Sullivans Elementary School with an intervening tour in Karlsruhe, Germany at the elementary school. Her last assignment was Argonner Elementary School, Hanau, Germany.

Ana had a wonderful eye for photography. She had the ability to capture a person’s essence and character. Nature, Japanese Culture, children, and anything she encountered were transformed through her camera’s eye. Always an inspiration was her joy for life.

In her later years, her life was a profile of courage as she continued to enjoy life at its fullest despite her final struggle. She has taught us to celebrate life.