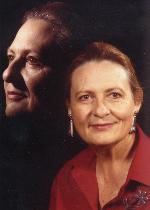 Dr. A. Lucille Hansen (Lucie) is a charter member of AOSHS and served as 2nd Vice President from 1996 to 2002. As an original member of the Board of Directors, she has strongly supported the goals of the organization from the beginning.

Lucie was born in Lakeside, AZ. where her parents worked on the Navajo Reservation. She gained her elementary schooling there, but since no high school was available, she lived with relatives in Phoenix to continue her education. She earned her BA at Arizona State Teachers’ College in Tempe.

She began her teaching career in Menary, AZ where she taught half-time at the high school (biology, girls’ chorus, and girls’ P.E.), and half-time elementary music grades 1-6. After two years Lucie moved to Phoenix, teaching music in grades 6 to 8. She earned her MA in counseling and education at ASU. She then taught third grade in Mesa for a year, feeling it would help her eligibility to teach overseas.

She was right! In 1953 Lucie was selected for a third grade position in Wiesbaden, Germany. In 1955 she returned to Mesa to teach fourth grade, and in 1958 finally achieved the coveted position of Girls’ Counselor at the high school. Her longing to return overseas took front stage, however, and in 1959 she returned to DoDDS teaching 28 students in grades 4,5, and 6 in a quonset hut school in Saudi Arabia for two years. From 1961 through 1967 Lucie served as principal of the elementary school in Izmir, Turkey. She helped plan the All Middle Eastern Teacher’s Conference where the first session was held at the amphitheater at Ephesus, a truly remarkable setting.

In 1967, Lucille attended Stanford University for a year, then returned for her final year overseas as principal at Butzbach, Germany, a K-8 school.

In 1969 she returned to Arizona, later earning her Ed.D at ASU in Tempe. She worked at various teaching and administrative positions in the Scottsdale, AZ school district, retiring in 1989.

After joining the Board of Directors of AOSHS Lucie did the initial work on the first Early Days book, having those who went overseas from 1946-55 write their recollections of those first years overseas. Many of those contributors have now passed away, but their stories and the history they lived are recorded for the archives. She also began video taping activities at the annual overseas schools reunions. This led to video taping educators, so now their stories would be told rather than written, as in the Early Days book. These will be significant additions to the archives.

Though Lucie is retiring from the Board, her interest in the growth and well-being of AOSHS will continue. She will support the organization through continuing video taping projects.