Dreux American High School is also referred to as Normandy High. The school colors were white and red and the teams were the Normandy Vikings. The school was opened in 1960 and closed in January 1967. The school opened as a 9-12 high school and from the fourth school year until closure included grades seven and eight. The first school principal was Jared T. Lyon. He suffered a heart attack during the year and was replaced by Dr. Carl B. Gustafson. By the third year, the school enrollment had increased by 45%.

The school was located about sixty-five miles west of Paris and seventeen miles from the city of Dreux. It opened with a new building with an auditorium, a modern gymnasium, and sports fields. According to the school handbook, “The residence halls will enable those pupils living in remote areas to take advantage of the educational facilities here.” The first newsletter, Vol 1, No 1 was dated October 22, 1960. The newsletter stated that “This year’s opening is perhaps just a little more exciting for the students of Dreux for we have a new school in which to begin, with new students, new teachers and new books. Amid the smell of paint and wood shavings. Students entered their classrooms for the first time on September 7.” Students came from Greece and the Belgium Congo, and resided in 7-day dorms. Students from Evreux stayed in 5-day dorms. Residence fees were $2 per day and included three meals a day, recreational, hobby and laundry services for seven-day students. Five-day dorm students paid $9 per week. The first dorm was designed for 192 students, 96 girls and 96 boys. By the third year there were four dorms to serve the 375 students from Norway, Ethiopia, Saudi Arabia, Pakistan, Afghanistan, Turkey, Italy, Germany, and the Benelux nations.

The newsletter, Notre Viking, also stated that “This first year is a year of organization, a year of work. Limitless opportunities and advantages surrounded us. An able and well qualified faculty promote interest and competition in scholastic achievements and encourage good citizenship. A well supplied library provides any additional references required. The nearby dining hall provides three well-balanced meals a day. The gymnasium and adjacent baseball and football field are open for use at all times. Authorized trips to Paris and to points of lasting interest have been scheduled for various times during the year.”

The sports program for the school included basketball and cheerleading the first year. For the second year, football and soccer were added for men, and a Girls Athletic Association and the Pep Club were available for women. The next year wrestling for men was added and by the fourth year a full sports program was available including golf, tennis, cross country and track for men. That year the school won several sports championships including conference titles in football and golf. In the last full year of the school, the basketball team was the USDESEA champs for their division in basketball. 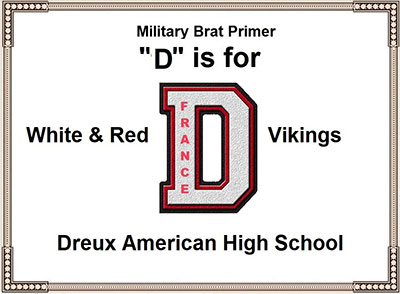